LeBron James' uni mix-up surprised him, too: 'Never realized that' 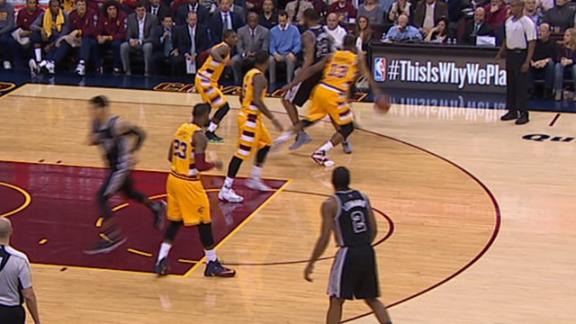 CLEVELAND -- Everything seemed to click for LeBron James and the Cleveland Cavaliers in their 117-103 win over the San Antonio Spurs on Saturday.

James had on the Cavs' standard-issue gold shorts for the 2015-16 season, while the rest of his teammates were in their full Hardwood Classics uniforms, shorts included, in celebration of the "Miracle of Richfield."

The Cavs jumped to an eight-point lead before Mike Templin from Cleveland's equipment staff brought the proper pair of shorts from the locker room for James to change into midway through the first quarter.

According to a spokesman, it was a mistake by a locker room attendant.

"I put the uniform on that was in my locker, like every game, and they came to me and said I needed to change shorts during the timeout," James said. "So I never realized that. I seen two: a yellow top, a yellow bottom. I know we got a couple different yellow uniforms now, so we'll be checking from now on."

The Hardwood Classic shorts had alternating white and red stripes down the sides, while the shorts James wore to start the game were plain, other than a stitched Cavs logo with a sword through it.

James, who went on to lead the Cavs with 29 points, wasn't the only one unaware he didn't match. Cavs coach Tyronn Lue was in the dark about the fashion snafu until he was asked about it during his postgame news conference.

LeBron James' wardrobe malfunction
LeBron James' shorts don't match with the rest of the Cavaliers, so he changes mid-quarter to correct the issue.