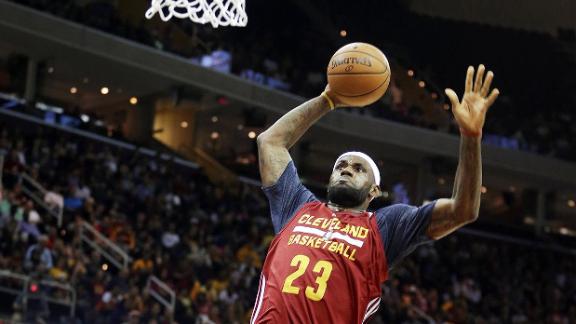 INDEPENDENCE, Ohio -- LeBron James might not hold an official title within the National Basketball Players Association, but his standing as the league's best player put him in an important position to speak about the new television rights deal.

"I am kind of the guy that has the power, I guess, without even having to put a name on it," James said Monday after the league announced a nine-year extension of its TV deal with ESPN and TNT that begins in 2016-17. "I'm very educated and I will use what I have to make sure our players are taken care of."

The deal, which The New York Times reports is worth $2.66 billion annually, will nearly triple the $930 million per year the league currently takes in from its TV and digital rights.

The payday comes less than eight months into Adam Silver's already celebrated tenure as the commissioner, but James pointed out all of the work that David Stern put in running the NBA the last 30 years before retiring in February was critical in it coming together.

"Give a lot of credit to David Stern, I'll tell you that," James said. "He built our league, he built our brand and for us to be able to make a television deal like that for that type of money, it was a lot of his vision."

Just as the NBA and its broadcast partners did in striking a deal years before the current one expires, James said that the NBPA and the owners -- with the influx of TV revenue now promised -- should begin hammering out a new collective bargaining agreement before both sides can opt out following the 2016-17 season.

"At the end of the day, we will negotiate," James said. "We know it's going to happen at some point because our deal is ending soon. We would love to do it sooner than later. We don't want to it to happen like it happened last time when we went into a lockout."

The current CBA came to be in December 2011 following a 161-day lockout. The league claimed it was losing $300 million annually, with 22 of the 30 owners operating at a loss. The players accepted a new deal that gave them approximately 50 percent of the league's annual basketball-related income (BRI), a sharp decrease from the 57 percent they received from the previous CBA.

James said that the new TV deal, along with a spate of teams being sold for unprecedented sums (the Los Angeles Clippers went for $2 billion in July), will cause the players to dig in for their rightful portion of the profits this time around.

"The whole thing that went on with the last negotiation process was the owners was telling us that they were losing money. There's no way they can sit in front of us and tell us that right now after we continue to see teams selling for billions of dollars, being purchased for $200 million, [selling] for 550 [million], 750 [million], $2 billion," James said. "And now [Mikhail] Prokhorov is possibly selling his majority stake in the Nets for over a billion. So, that will not fly with us this time."

While the current CBA seems to be skewed in the owners' favor, James said that getting a deal done in order to salvage a 66-game shortened season in 2010-11 led to the explosion in revenue the league is seeing today.

"I think it was a good deal," James said. "I think you can always want more and give less. But I think both sides kind of benefited from it, as you see in this new TV deal. Both sides continue to grow it, but there's some things that we'd like to see changed as players going forward."

One of those changes could be the NBPA pursuing the abolition of max contracts. James would not comment on his stance on the subject; however, reporters including ESPN's Brian Windhorst have intimated that the increase or removal of max contracts is indeed on James' agenda for the next CBA.

"I don't even really get into speculation conversations in my name," James said. "I haven't even began to think about as far as how I'm going to go forward with what I'm doing. I've been too busy worried about how we're going to get better in training camp. But there will become a point and time where I will sit back with my team and some of the guys and from a players' perspective, from a Players Association perspective, how we go about this with this new deal approaching."

James saw the new television deal coming down the pike when he signed with the Cleveland Cavaliers in July, opting for a two-year, $42.1 million deal rather than the full max available to him of four years, $88 million. While the shortened deal also presumably put pressure on Cavs management to adopt a win-now mentality, James acknowledged that the upcoming TV deal also dictated his decision.

"It was being a businessman," James said. "I understand the business of this sport. It had a lot to do with it."

Carmelo Anthony, who re-signed with theNew York Knicksin the summer for $124 million over five years, said Monday he has no regrets about signing a five-year deal with the Knicks even if a shorter-term deal could have potentially led to a more lucrative deal down the road.

James said he has learned the business side of the game from teammates like Roger Mason Jr., vice president of the NBPA, as well as James Jones, the NBPA team representative for both Miami while James played there and now the Cavs, Ray Allen (who experienced two lockouts, 2011 and 1998, during his 18-year career) and from his friend and USA Basketball teammate, Chris Paul the current NBPA president.

James said it's on the league's players to continue to enlighten one another about the business side of things.

"That's a problem that we have," James said. "Sometimes guys want money but are not educated. Guys want the best deal, but are not educated on what's going on. There's 30 owners, but there's 400-plus players. We know we have to do what's best for all the players, but at the same time, guys have to be educated about it so when the negotiation process happens, guys are not speaking just to be speaking and have no idea what's going on."

James, who famously stated his intention to become a "global icon" during an interview early on in his career, even considered a run as union president. While his busy off-court schedule full of family and endorsement obligations ultimately caused him to reconsider -- "At the end of the day, I knew I couldn't give all my time and efforts to it," he said -- he remains acutely aware and very much invested in how the NBA does its business.

The question remains if that growth can continue unfurled and whether another work stoppage can be avoided in the summer of 2017.

Information from ESPNNewYork.com's Ohm Youngmisuk was included in this report.

LeBron: TV Deal Will Impact Labor Talks
Dave McMenamin discusses comments by LeBron James indicating that with the NBA's new tv deal, it will be time to take care of the players as they prepare to negotiate for the next collective bargaining agreement.