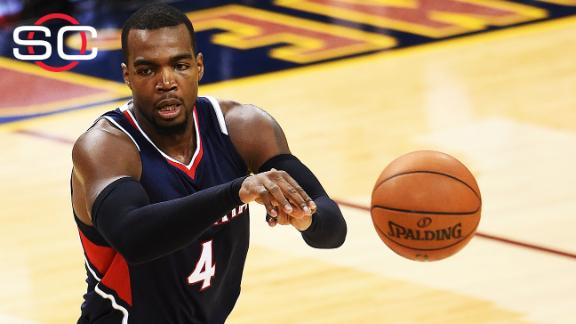 Paul Millsap met with the Orlando Magic at 12:01 Wednesday morning and was offered a maximum four-year, $80 million deal, according to league sources.

Millsap, an All-Star with the Atlanta Hawksthe past two seasons, now will decide between the Magic and the Hawks, who have offered him the same contract, sources said.

A decision could come as early as Wednesday.

The New York Knicks, Indiana Pacers and Dallas Mavericks also expressed interest in Millsap, but he does not plan to meet with those teams, sources said.

Also Wednesday, the Hawks acquired center Tiago Splitter in a trade with the San Antonio Spurs, sources said. If Millsap signs with the Magic, the Hawks can start Splitter at center and move All-Star Al Horford to his more natural position of power forward.

After six strong seasons with the Utah Jazz, who chose him 47th overall in the 2006 draft, Millsap emerged as one of the game's better two-way power forwards during his two seasons in Atlanta, where he was the 60-win Hawks' most consistent player nightly in 2014-15.

Once seen by many conventional thinkers in the NBA to be too undersized to excel as a frontcourt player, Millsap flourished in Hawks coach Mike Budenholzer's motion-based system, which values versatile, active players with the ability to read the floor and act decisively in the half court.

Information from ESPN.com's Brian Windhorst and Kevin Arnovitz contributed to this report.