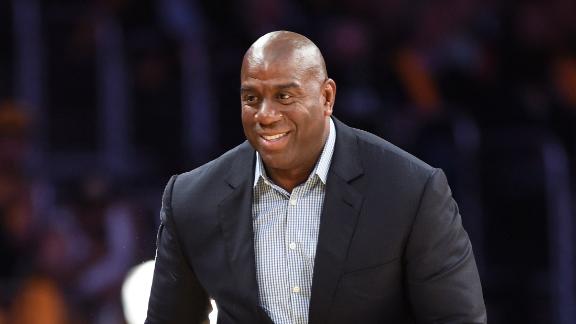 Former Los Angeles Lakers star Magic Johnson said he has serious questions about whether Jim Buss can turn around the team, which is mired in the worst period in franchise history.

"Jim is trying to do it himself and trying to prove to everybody that this was the right decision that [his] dad gave [him] the reins," Johnson said Tuesday on ESPN's "First Take." "He's not consulting anybody that can help him achieve his goals and dreams to win an NBA championship."

Buss became the Lakers' executive vice president of basketball operations -- the top person on the basketball decision-making side -- after his father, legendary owner Jerry Buss, died in February 2013.

However, the past two Lakers seasons have been filled with tumult. The team posted a franchise-high 55 losses last season and, at 13-39 after Tuesday night's loss to the Denver Nuggets, is on pace to lose even more games this season.

"If Jim would say, 'OK, Mitch. You run the show,' I think it would be a lot better for the Lakers, too. Mitch Kupchak knows what he's doing. He's great. He's smart. He's hard-working. He's at every practice. I think the fans would feel good [if he ran the team] as well," Johnson said.

Johnson, who has been an outspoken critic of Jim Buss since the Lakers hired Mike D'Antoni as coach over Phil Jackson in 2012, called this upcoming offseason the "biggest" of Buss' life.

"If he doesn't have a big summer with a free agent," Johnson said, "it looks like they'll have a good draft pick. Put that together with a good free agent, you can be right back into the mix. If this summer, that doesn't happen where they can sign a great player, it's over for us."

The Lakers will have enough salary-cap space to sign at least one max-level free agent this summer, and several big names loom, including Marc Gasol, LaMarcus Aldridge, Goran Dragic and Rajon Rondo.

Later, in an appearance on Stephen A. Smith's SiriusXM/Mad Dog Sports Radio show, Johnson again questioned Buss, although this time he did so while referencing Lakers star Kobe Bryant.

"And I really believe this: [Kobe] should ... say to Jim and them, 'Look, if you don't sign one of these free agents [this offseason], man, I'm just not going to play next year,'" Johnson said.

Bryant's contract expires after the 2015-16 season.

Smith then asked Johnson whether he would advise Bryant to retire if the Lakers don't acquire a marquee free agent in the summer of 2015.

"You almost gotta say that because if you come back with the same level of talent, you're just going to have the same results," Johnson said. "You know, so, look, Kobe, put pressure on Jim to say, 'Look, man, you've got to bring me some talent, some help, so that this can be a great season for the Lakers and a great season for me, being my last season, and then I can retire.'"

"I've been with Jim now since July," he said. "I haven't spent a ton of time with him, but the guy has an unbelievable passion for this game and this organization. I know he wants this thing to work out extremely well, like we all do. So I didn't read or hear [Johnson's] comments and really can't comment on that, but I do know Jim is going to do everything he can in his power to get this organization back to where it should be. We both, and myself included, and him and Mitchand [president] Jeanie [Buss], all feel this is a championship organization, and that's what we're trying to get back to."

Scott said he has talked to Johnson seven or eight times throughout the season, and those conversations weren't focused on basketball.

"He's been just like we all are; he understands the process that we've got to go through this right now," Scott said. "What I did read a little bit this afternoon, it's a big summer. And I think everybody feels that way."

Johnson, in his remarks on "First Take," also tried to shoot down the notion that his criticism is an effort to gain influence within the Lakers' organization.

Johnson reiterated that he is close with Buss' sister Jeanie.

"Dr. [Jerry] Buss raised Jeanie and I up together," Johnson said. "When Jeanie went to USC business school, he was bringing us along together. Jim was not part of the Lakers. He never really saw our championship years. Jim was doing his own thing.

"He came back later on, and Dr. Buss knew he wanted the kids to decide later on to run the basketball side because Jeanie was definitely going to run the business side. I like Jim as a person. But at the same time, a great CEO or person who is in a powerful position will surround himself or put together a team to help them achieve their goals and dreams. Jim has not done that."