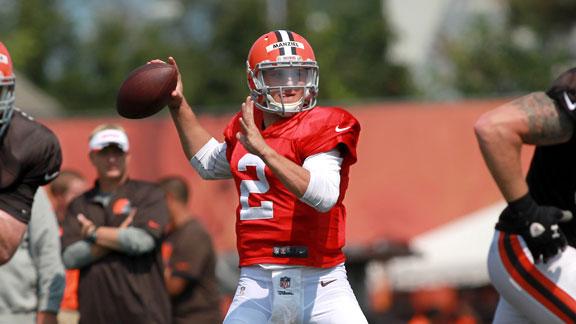 Nearly seven in 10 NFL players surveyed by ESPN.com and ESPN The Magazine think Johnny Manziel will succeed in the NFL.

The survey, conducted by ESPN.com's NFL Nation reporters, asked 100-plus players: "Yes or no: Johnny Manziel will be a bust." Of the 82 players who answered, 69 percent said Manziel would succeed in the NFL.

The survey was conducted prior to the first preseason games and well before Monday night's incident when Manziel flashed an extended middle finger to the Washington Redskins bench.

Manziel has struggled during the preseason, including completing only 7 of 16 passes for 65 yards and a touchdown against the Redskins on Monday night.

Even before the Browns selected Manziel 22nd overall in the 2014 draft, there was little middle ground on the Heisman Trophy-winning quarterback. Manziel may be unconventional in a lot of ways, but he has become the prototype for the boom-or-bust prospect of the selfie era. The consensus seems to be that Manziel will finally be the quarterback who delivers a championship to a city starved for one -- or that the Texas A&M product will crash and burn.

Pittsburgh defensive coordinator Dick LeBeau seems to agree with the polled players who don't think Manziel will be a bust.

"He makes plays, and he was playing against some real talented athletes in that conference," LeBeau said. "From what I could see, [Texas A&M] was getting up there around 45, 50 points per game, so your quarterback's got to be doing something right. And he can keep the play alive."

LeBeau has already started preparing for Manziel -- Cleveland opens the regular season Sept. 7 in Pittsburgh -- with Browns coach Mike Pettine yet to decide on Manziel or Brian Hoyer as his starting quarterback. That is how highly LeBeau thinks of Manziel, who tormented the SEC the previous two years with his scrambling and playmaking ability.

One thing Manziel resuscitated before ever throwing a pass in a Browns uniform was the hopes of long-suffering fans -- try as he might to shrug off what his arrival has meant to Cleveland.

"I don't look at is as I was drafted to come in day one and save the franchise," Manziel said. "For me, there's no pressure, there's no time table. It's to continue to develop as a football player, get smarter, get better, and whenever that time is, I'll go out there and play football like I've been doing for the past years of my life."