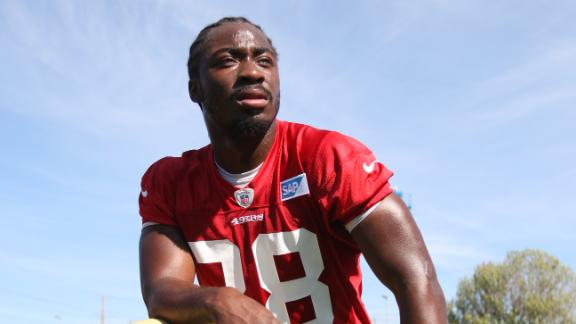 San Francisco 49ers running back Marcus Lattimore is considering retirement but has not made a decision, coach Jim Harbaugh confirmed Monday.

"He's weighing his options," said Harbaugh, who added that the team should know more in the coming days. "He's going to talk to his family. We're in the process of that right now.''

Lattimore's agent denied a sourced ESPN report that the running back had already made up his mind to retire because of knee issues, saying instead that all options are still on the table.

Agent Michael Perrett told ESPN that Lattimore would meet with the team Monday to discuss his future, which could include options such as retirement or continuing to try to play.

Lattimore, 23, was not with the team during Sunday's home game against the St. Louis Rams.

"Did not see Marcus," Harbaugh said after the game in response to Lattimore's absence. "I'm sure we'll have an announcement about that."

Lattimore spent the 2013 season on the non-football injury list and remains on that list this season. However, he did begin practicing last week with the hope that he would be able to play later this season. Lattimore wants to keep his options open in case the team is willing to give him more time to rehab; however, Lattimore was having issues with his surgically repaired right knee during practice last week.

The 5-foot-11, 220-pound back suffered serious knee injuries in 2011 (he tore the ACL and MCL in his left knee) and 2012 (right knee) during his time at the University of South Carolina.

He was a fourth-round draft pick of the Niners although his college career ending with the devastating injury in 2012 that tore every ligament in his right knee and dislocated the kneecap. He was a potential first-round draft pick but sat until San Francisco selected him 131st overall as his rehab was already underway.

Lattimore said he has embraced his lot as a role model for athletes who have suffered knee injuries and said his faith and talks with his mother and sister helped him through bad days.