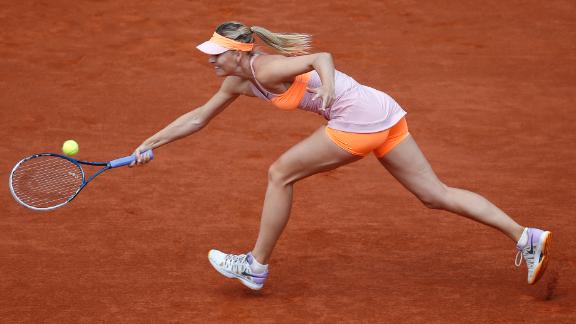 PARIS -- Might be easier said than done. Still, Maria Sharapova offered a tidy aphorism to sum up the formula that's carried her to a third consecutive French Open final.

Right now, no one is a better closer than she is on clay. Nearing a second championship at Roland Garros, and fifth Grand Slam trophy overall, Sharapova gritted her way to yet another comeback victory, beating 18th-seeded Eugenie Bouchard of Canada 4-6, 7-5, 6-2 in the semifinals Thursday.

"If some things are not working out, I don't just want to quit in the middle. Because when you lose the first set or a few games or you're down a break, that's not the end of the match," Sharapova said. "That's the type of philosophy that I play with."

She famously described herself years ago as feeling like a "cow on ice" on clay, but Sharapova now has won her past 19 matches that went to three sets on the demanding surface.

In Saturday's final, the No. 7-seeded Sharapova will face No. 4 Simona Halep, a 22-year-old Romanian who never before had been past the quarterfinals at a major. Halep turned in a much more straightforward victory than Sharapova, eliminating No. 28 Andrea Petkovic of Germany 6-2, 7-6 (4).

"I have a lot of confidence in myself now," said Halep, who a year ago was ranked only 57th and lost in the first round in Paris for the third time since 2010. "I played really well here; a few good matches. But next round will be very tough. I know Maria. She's a great champion."

She is 0-3 against Sharapova. But Halep has claimed seven titles since the start of last season -- "Impressive 12 months," she called it -- and used her smooth movement and smart angles to win all 12 sets she's played these two weeks.

In the fourth round against 2011 U.S. Open champion Samantha Stosur, Sharapova trailed 6-3, 4-3, then won the last nine games.

In the quarterfinals against 20-year-old Garbine Muguruza, the woman who stunned Serena Williams last week, Sharapova trailed 6-1, 5-4, then won nine of the last 10 games.

That pattern continued against another 20-year-old, Bouchard. After dropping the first set, then standing two games from defeat at 5-all in the second, Sharapova won eight of the last 10 games.

She did it by playing aggressively in crunch time, risking more but also coming through more. After Bouchard's ability to take the ball early helped her build a 13-8 edge in winners in the first set, Sharapova had a 25-16 edge in that category over the last two, celebrating most by shaking her left fist and crying, "Come on!"

"She kind of elevated her game a little bit," said Bouchard, who had been 9-0 in Grand Slam matches when winning the opening set.

This was only Bouchard's fifth major tournament, her second in a row reaching the semifinals.

Less than two years ago, Bouchard was at the junior level, winning the Wimbledon girls' title.

The 27-year-old Sharapova already owns a career Grand Slam, with titles at Wimbledon in 2004, the U.S. Open in 2006, the Australian Open in 2008, and the French Open two years ago. And for someone who used to have a hard time on clay, she is 53-4 with six titles on it since the start of 2012; three of those losses came against Williams, including in the 2013 French Open final.

"Sharapova does a good job of trying to stay in the moment," Saviano said. "She's got a lot of experience and a lot of fight. And she's been around a long time."

Sharapova put aside various problems she had Thursday, including nine double-faults, two that wasted set points at 5-3 in the second. She showed terrific defense and court coverage when it counted most, forcing Bouchard to hit extra shots.

Most important, at 2-1 in both the second and third sets, Bouchard raced to 40-love leads on her serve, only to have Sharapova steel herself and wind up breaking.

"I didn't feel that I was playing my best," Sharapova said. "I fought, I scrambled, and I found a way to win."

Sharapova Into Third Straight French Open Finals
Maria Sharapova was challenged in the first set, but beat Eugenie Bouchard 4-6, 7-5, 6-2 in the semifinals of the French Open.

60-Second Slice: French Open Day 12
Prim Siripipat recaps a big Day 12 at Roland Garros in just 60 seconds, including a Throwback Thursday picture from when Eugenie Bouchard literally looked up to Maria Sharapova, and find out which woman has made it into her very first Grand Slam final.

Sharapova On Win
No. 7 seed Maria Sharapova speaks with Darren Cahill about her three-set victory over No. 18 Eugenie Bouchard in the semifinals of the French Open.

Emotional Win For Simona Halep
Simona Halep discusses her win over Andrea Petkovic in the semifinals of the French Open.