Maria Sharapova, Serena Williams to face off in Aussie quarters 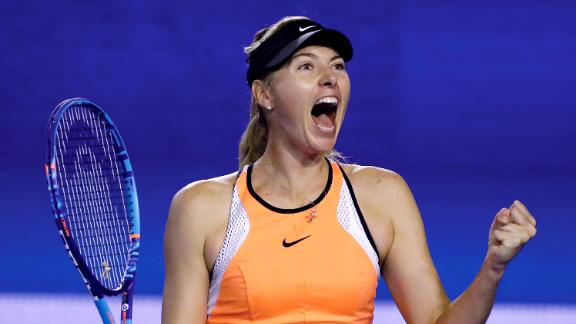 MELBOURNE -- From the moment the draw was released, this match was flagged as the first potential blockbuster of the tournament.

With straight-sets wins Sunday, Serena Williams and Maria Sharapova set up a meeting in the Australian Open quarterfinals.

Williams, the world No. 1, dropped her opening service game against Margarita Gasparyan but then rolled to a 6-2, 6-1 victory, her 11th straight win Down Under.

The first set ended in just 29 minutes, and the second was even more dominant.

Williams has yet to lose a set in the tournament, the first time she has done so in the first four rounds of a major since the US Open two years ago.

"I knew going in [Gasparyan] was going to go for her shots, that she was hungry," Williams said in her on-court interview. "She is an aggressive player, and I knew I had to be ready."

Sharapova had a much taller task. Behind a career-high 21 aces, she held off precocious No. 12 seed Belinda Bencic in a tightly contested 7-5, 7-5 win.

Sharapova, who needed 2 hours, 5 minutes to secure her place in the final eight, leads the WTA with 52 aces in this tournament, more than cannon-serving Milos Raonic on the men's side.

"I feel like that's something I have been working on a lot since I had shoulder surgery," Sharapova said. "I have gone through many different motions to try to find my groove again and something that would hold up over many matches.

"That was something that was really difficult -- to find a rhythm and a balance between keeping the shoulder, not going back so much because I'm quite loose, to a motion that kind of gave me the chance to play many matches and feel like I was still not able not to be tired after three, four tough matches."

The opening set was marred by a long stretch of spotty shot-making. With the score tied 2-2, the players exchanged four consecutive breaks. Finally, at 6-5, after a series of holds, Sharapova clobbered a crosscourt forehand return that Bencic could not handle to secure the frame.

Then, in the second, with Sharapova up 6-5 again, she hit a ball that appeared to sail long on break point, but Hawkeye overturned the call, handing Sharapova the victory.

Sharapova, the 2008 champion Down Under, had spotty play throughout but finished with 58 winners.

"Ultimately, when the time comes, you have to believe that those errors are just, you know, a few centimeters wide or long that they're going to start going in."

The cacophonous shrieks of Sharapova rang louder under the closed roof in Rod Laver Arena. The tournament often is affected by extreme heatwaves, but on Sunday, rain forced the roof to be closed for the fifth straight day in Melbourne. With temperatures reaching no higher than 67 degrees, there's more inclement weather in the forecast down the stretch of the event.

"Quite strange to play more indoor than outdoor matches," Sharapova said in her on-court interview. "I think I have played three back-to-back indoors, but this is an outdoor tournament, so I'd love to play outdoors in my next match."

The roof eventually opened before Williams began her match. She played solid tennis throughout, finishing with 19 winners and 14 unforced errors to reach the Aussie quarterfinals for the ninth time.

Last season, Williams came within two match wins of sweeping the season's four majors. She took a four-month layoff after falling in the US Open semifinals, but despite her dearth of activity, Williams has been business as usual.

At 28, Sharapova has been operating on the tour for more than a decade, but she's not ready to call herself an old soul yet.

Her experiences, she says, have helped her overcome the hardships of the grind. Sunday in Melbourne, that veteran attitude helped her take down Bencic.

One of the touted teenagers on tour, Bencic was swinging freely throughout, keeping Sharapova on her heels. Ultimately, Bencic's serve failed her, especially her second serve, of which she won only 18 of 38 points (47 percent).

Sharapova, who before the match said Bencic was part of an impressive new generation of players, reiterated that sentiment afterward.

"She's beaten a lot of top players," Sharapova said. "She's not coming up; she's already there, pretty much. She has a good game. You know, a lot of people compared her to Martina Hingis, actually, but I thought from being on the other side that her game was quite different. Maybe the same technical aspects, but the way that she plays is quite different.

"She does take the ball early. She has a few patterns that she likes, which was nice to finally play against her to kind of recognize those."

A year ago, Williams won her sixth Australian Open with a competitive, 6-3, 7-6 (5) victory against Sharapova. Then, in July, Williams won a swift semifinal encounter at Wimbledon, the 17th straight win in the series.

Sharapova enters the Aussie quarterfinals with a 2-18 career against Williams, but there is a slice of silver lining: Sharapova brings a 7-0 Aussie Open quarterfinal record into Tuesday's showdown.

"I'll be ready," Williams said, also noting she did not know Sharapova had earlier prevailed. "Neither one of us has anything to lose, so we'll both do the best we can."

Sharapova holds off Bencic
Maria Sharapova defeats Belinda Bencic 7-5, 7-5 in the Round of 16 at the Australian Open.