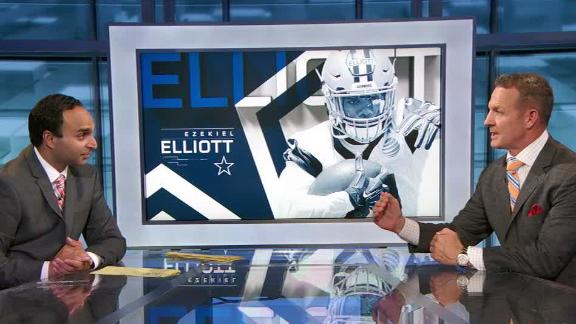 FRISCO, Texas -- Running back Ezekiel Elliott said he's learning to handle the scrutiny that comes with playing for the Dallas Cowboys.

A few hours before the Cowboys played Seattle last Thursday, Elliott visited a store that sold marijuana. It's legal to sell it in Washington state.

"You definitely have to think of the perception of things before you actually do certain things," Elliott said Monday. "It may not seem like it's a big deal to you yourself, but there's a bigger picture.

"It's definitely a learning experience about the scrutiny. You just have to be careful and not give anybody a chance to say anything."

"I don't think it was a good decision," Garrett said Saturday. "He and I talked about that. It was just a poor decision on his part and young players sometimes just have to understand that perception can be reality.

"You have to understand you're under a microscope 24 hours a day, and there's no good reason for him to go into a place like that.

Elliott, who said he doesn't expect to play Thursday against Houston, said he was sightseeing when he noticed the marijuana dispensary.

"I seen it walking around and I was curious," Elliott said. "I didn't really think about what the repercussions could have been.