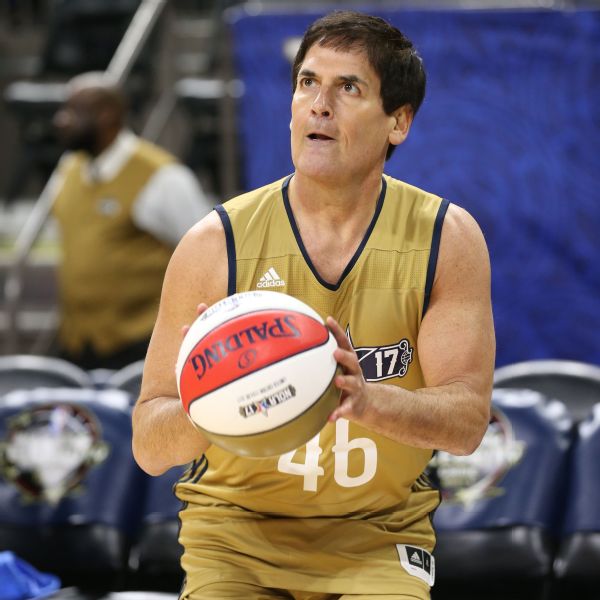 A source told ESPN before the celebrity game that Cuban's jersey number, which represents the number of the next U.S. president, was likely in response to Trump.

Cuban, with tongue in cheek, initially insisted that his favorite number, 23, was taken and that "23 times 2 is 46." No one on the West celebrity squad wore No. 23, however.

He later said with a smile that the number choice was "to tweak the s--- out of everybody.

Cuban said he'd hinted to people earlier in the day to keep an eye on his jersey number choice.

"Yeah, yeah, watch the jersey number, not my game," said Cuban, who finished scoreless with one rebound and a steal in 17 minutes as the West lost 88-59 to the East. "Yeah, it was fun. You've got to have some fun with all of this. You can't take yourself too seriously. Some people do. I don't."

Milwaukee Bucks co-owner Marc Lasry, who played on the East celebrity squad, said he knew why Cuban chose to wear No. 46.

Trump posted a tweet about Cuban on Feb. 12, writing: "I know Mark Cuban well. He backed me big-time, but I wasn't interested in taking all of his calls. He's not smart enough to run for president!"

Cuban, who was a vocal supporter of Hillary Clinton during the presidential election, has frequently been critical of Trump, particularly on Twitter. Earlier Friday, Cuban posted a series of six tweets in which he slammed Trump's policies and character.

Among Cuban's tweets, he wrote, "Trumps biggest issues are: No self-awareness, no situational awareness, can't admit mistakes, no leadership skills, can't stay focused," and "No management skills, doesn't read, doesn't use tech and makes no effort to learn, only consumes analog media."

Cuban also tweeted about Trump, "People are fungible to him. He doesn't care who stays or goes."

Cuban joins Spurs coach Gregg Popovich,Warriors coach Steve Kerr andPistonscoach Stan Van Gundy among those in the NBA who have been critical of Trump before and after the election.

Lasry said he thinks Cuban would have a shot if he opted to run for president, "just like anybody's got a shot."

Cuban, though, said his jersey selection Friday wasn't meant as a hint of his future plans, saying he "doubts" that he has a future in politics.