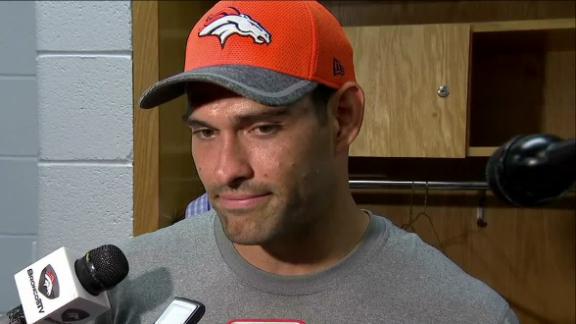 The first pass of their 2016 preseason was a left-handed throw by a right-handed quarterback, but the Denver Broncos settled in after Mark Sanchez' initial off-hand flip as the team's competition at quarterback didn't get any more settled.

Sanchez finished 10-of-13 passing for 99 yards and a touchdown to go with an interception. Trevor Siemian was 7 of 12 for 88 yards and led the team to a field goal. Rookie Paxton Lynchplayed the second half for the Broncos.

"We came out with a purpose: Let those guys throw it around,'' Broncos coach Gary Kubiak told KUSA-TV as he left the field at halftime.

That they did, as Sanchez and Siemian were a combined 17 of 25 for 187 yards in the opening half. The Broncos had a 20-0 lead at halftime, including a blocked punt that linebacker Zaire Anderson recovered for a touchdown.

Sanchez started, and after the opening southpaw toss, he showed some of the best of his game but also displayed why turnovers have plagued him for much of his career.

Sanchez went 7-of-8 passing for 83 yards, with the 32-yard touchdown pass to Demaryius Thomas on the Broncos' opening drive -- a 10-play affair that used up the opening 5 minutes, 28 seconds. But as the Broncos started to move the ball again in their second possession, Sanchez had a tipped pass intercepted by Bears linebacker Jerrell Freeman.

Entering the game, Sanchez, who has 84 career interceptions in 75 regular-season games, said he knew the importance of avoiding turnovers.

"The most important thing when you come to a preseason game is that these plays aren't really scripted anymore,'' Sanchez said earlier this week. "It's not just a practice atmosphere where you go through and say, 'OK, this is the situation.' It's all happening at a much more fluid manner. You have to be able to handle those situations as they present themselves, just move your team down the field, learn from the mistakes you made in practice and transfer those over to the games. You have to be proud of what you put on tape.''

Siemian, who played at Northwestern and whose parents were at Soldier Field on Thursday night, entered the game early in the second quarter. Like Sanchez, he got plenty of chances to throw the ball.

Siemien had a chance for a touchdown on his first drive, but Bennie Fowler couldn't haul in a well-placed pass to his back shoulder, with Bears rookie cornerback Deiondre' Hall knocking out the ball.

As a result, Siemian's first drive ended with a field goal. He is expected to get the start in the Broncos' second preseason game Aug. 20, against the San Francisco 49ers.