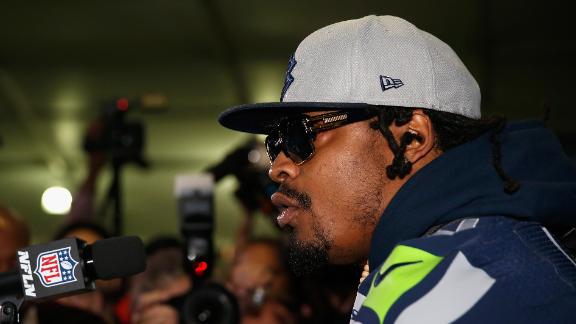 Seattle Seahawks running back Marshawn Lynch complied with his obligation to attend all required media sessions at the Super Bowl and will not be fined, according to an NFL official.

In addition, there is no basis for a fine for the Beast Mode hat he wore at the media sessions, which was made by and given to him by an NFL licensee, New Era, and was in team colors.

Lynch came to media day last Tuesday and answered every question with some variation of "I'm just here so I won't get fined." He said it 29 times before a timer on his smartphone went off after five minutes, signaling to him that his required time was up, and he left.

Last Wednesday, he only said, "You know why I'm here," in response to questions. He left again after five minutes. On Thursday, Lynch gave a brief statement, but again did not answer questions.

Seahawks coach Pete Carroll said Tuesday in a radio interview that the Seahawks have been in active negotiations with Lynch regarding his future.

Lynch's contract runs through the 2015 season. Asked about the running back's future with the team, Carroll said: "We'll see."

"We've been in the midst of negotiations for a long time for the future. So we'll see how that goes," he said.

Lynch, who led the NFL with 17 touchdowns this season and finished fourth in rushing with 1,306 yards, will be paid $6.5 million in 2015, the final season of his current four-year contract.

He will be an $8.5 million salary-cap hit in 2015, but the Seahawks would save $7 million if they release him.

Russell Wilson Conspiracy Theory
Jemele Hill and Michael Smith say they don't buy the conspiracy theory that the Seahawks wanted Russell Wilson to throw the ball and become the hero instead of handing it off to Marshawn Lynch.