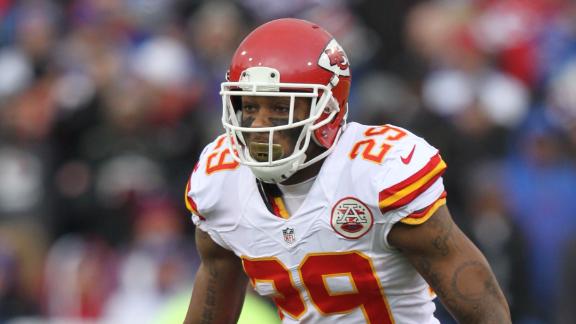 KANSAS CITY, Mo. -- Kansas City Chiefs safety Eric Berry has what team officials believe is lymphoma -- a form of cancer -- and has been placed on the season-ending non-football illness list. Berry will undergo further testing at Emory University Hospital in Atlanta to complete the diagnosis.

"At this point in time, we don't have a definitive diagnosis," Chiefs trainer Rick Burkholder said at a news conference Monday afternoon. "But the leading consideration for what he has right now is lymphoma.

"We first were alerted to something on Thursday night. It's now Monday. We still don't have a definitive answer. That's OK. We'll get to the experts and we'll get the answer. We'll get a treatment program and we'll go from there."

Burkholder said Berry complained of chest discomfort at the end of Thursday night's road loss to the Oakland Raiders. He was examined then by team physicians and returned to Kansas City with the team.

Berry was still experiencing discomfort on Friday, when he reported to the Chiefs' practice facility for regular day-after-game treatment.

"It just didn't quite add up to an orthopedic injury," Burkholder said.

Berry was given an X-ray, which was negative. Subsequent testing, including an MRI, revealed the mass in his chest.

Burkholder indicated that Berry, as well as his teammates, had a physical examination in June that includes a chest X-ray and blood work.

"Everything checked out then," Burkholder said. "I've obviously been with him a lot this season, and he didn't complain about anything until the [Oakland] ballgame."

Berry, 25, addressed his teammates before leaving for Atlanta and released a statement through the Chiefs.

"I am truly thankful for all of the support from family, friends, coaches, teammates and the entire Chiefs kingdom," he said in the statement. "At first I was in shock with the diagnosis on Saturday and did not even want to miss a game, but I understand that right now I have to concentrate on a new opponent.

"I have great confidence in the doctors and the plan they are going to put in place for me to win this fight. I believe that I am in God's hands and I have great peace in that.

"I know my coaches and teammates will hold things down here the rest of the season and until I am back running out of the tunnel at Arrowhead. I am so thankful and appreciative of being a part of this franchise and playing in front of the best fans in the NFL. I will be back!"

"He was upbeat and very positive," coach Andy Reid said of Berry's comments to the team. "He was awesome. He's not one that likes to do a lot of talking. But he felt like the team needed to hear it from him that he's OK and that he's going to get after this thing and get it fixed.

"There were some guys that were obviously shocked by the information and understandably so. These guys love him, and he's a big part of this football team not only as a player but also as a person and a leader. There were some guys that were shaken up. But I think with his strength and being able to talk to the players, they felt a comfort in that.

"When you get in these situations, you hunker down and you battle for your life is what you do. You have to be in a certain frame of mind. You have to have a certain support system to back you up, and Eric's got that, not only with family but also with the Chiefs."

Berry opted for testing and treatment at Emory because it is close to his home in the Atlanta area. He will be treated by Christopher Flowers, a lymphoma specialist.

"He's about 75 percent done with the testing," Burkholder said. "That evaluation will continue [Tuesday] and through the next couple days. We think we have Eric in a really good spot right now to have a really good outcome with this mass that's in his chest."

The Chiefs were off over the weekend but gathered Monday to begin preparations for Sunday night's game against the Denver Broncos at Arrowhead Stadium. But for Monday, at least, their minds were with their stricken teammate.

"We know it's going to work out for Eric," Reid said. "He's a beast, and right now he needs to be a beast. He'll attack this along with Dr. Flowers. I think it will be a very positive result when all is said and done."