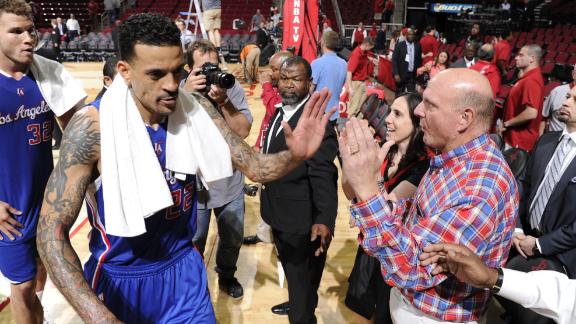 The NBA has fined Clippers forward Matt Barnes $50,000for directing inappropriate language at a courtside fan who turned out to be Houston Rockets star guard James Harden's mother, the league announced Friday.

During Game 2 of the teams' Western Conference semifinal series, Barnes, who had been exchanging words with fans throughout, made a profane remark toward Harden's mother.

Barnes said earlier Friday he was simply responding to remarks made toward him and didn't know he was making them at Harden's mother until afterward.

Clippers coach Doc Rivers spoke to Barnes about the incident before Friday's shootaround, and Barnes said he hoped to put the situation behind him.

"What I said was said and what she said was said. No matter what was said, we both said something," he said. "I got a tongue-lashing from Doc this morning, and we've made our peace, and I'm ready to play basketball."

Added Rivers before Friday night's Game 3: "I was not pleased and I made that clear. I made it clear to Matt and to the entire team.

"I just don't like it. We're out there and you got play. People talk and you got to play. Maybe I;m harder than other people but I want this team to be a great team in everything, first class in everything, so that's what I demand."

Harden spoke about the incident to reporters Friday morning.

"In any situation when you're talking about somebody's parents it's disrespectful," he said.

After Friday's 124-99 win over the Rockets, Barnes took issue with the idea thatChicago Bulls centerJoakim Noah, whopushed a fan during his walk to the locker room in Game 2 of the Eastern Conference semifinals, received a $25,000 fine -- half of what Barnes was penalized.

"I gotta watch my mouth but, for someone to get $25,000 for physically putting their hands on someone and then someone else to get $50,000 for verbally saying something, there's a problem with that."

Information from ESPN.com's Calvin Watkins was used in this report.

Barnes addresses $50K fine
Clippers forward Matt Barnes talks about the $50,000 fine he received from the league after directing inappropriate language at a courtside fan who turned out to be Rockets guard James Harden's mother.