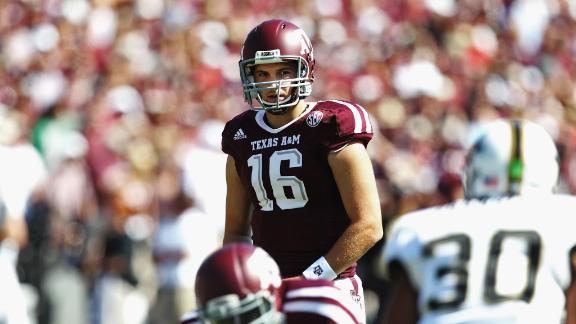 The race to replace Johnny Manziel as starting quarterback at Texas A&M is down to two, after the school announced Wednesday that Matt Joeckel will transfer from the program.

The Arlington, Texas, native and former three-star recruit played in four games last season, connecting on 22 of 37 passes for 293 yards and two touchdowns.

"Matt is a great Aggie and he has decided to transfer," coach Kevin Sumlin said in a news release. "We wish him all the best."

With Joeckel out of the picture, the competition at quarterback falls to Kenny Hill and Kyle Allen.

Hill, a 6-foot-1 sophomore from Southlake, outside of Dallas, played in four games as a freshman, completing 16 of 22 passes, including one for a touchdown. He also ran the ball seven times for 37 yards.

But Hill took a significant step backward late last month when he was arrested for public intoxication and soon thereafter suspended indefinitely.

Allen, the No. 1 quarterback in the ESPN 300, enrolled at Texas A&M in January and was able to compete throughout spring practice, which ended on April 5.

Sumlin has not set a timetable for naming a starter. Whoever it is will have enormous shoes to fill after Manziel's storied two-year reign at the position that yielded a Heisman Trophy and numerous school and conference records on offense.

Joeckel, who finished his undergraduate degree in December, will have immediate eligibility to play in his senior season. His brother, Luke Joeckel, was the second overall pick of the 2013 NFL draft by the Jacksonville Jaguars.

"I have loved my 4½ years at Texas A&M," Matt Joeckel said. "I am glad I had the opportunity to play for Coach Sumlin, Coach [Jake] Spavital and the rest of the coaches. I am proud to have my degree from the Mays Business School and I'll always consider myself a member of the Aggie family."