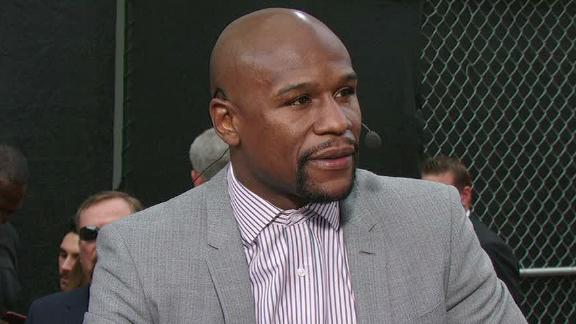 The scene was something millions of sports fans thought would never happen: Floyd Mayweather Jr. and Manny Pacquiao, the two best fighters in the world and boxing's two biggest stars, standing face-to-face, just the two of them, alone on a stage to finally announce the big fight -- one of the biggest ever.

The long-awaited moment played out Wednesday afternoon at the Nokia Theatre in downtown Los Angeles where, after red-carpet arrivals that made this look more like a Hollywood awards show than a boxing news conference, the fighters were introduced to more than 700 credentialed media members.

That is a gigantic number for a boxing news conference. Then again, this was not a normal boxing news conference. It was the only joint news conference Mayweather and Pacquiao will hold to hype the fight until fight week. Then, a few days later, they will square off to unify their welterweight world titles, determine pound-for-pound supremacy and crown the king of their era on May 2 (Showtime PPV/HBO PPV) at the MGM Grand in Las Vegas.

"I believe this is what you are waiting for since five years ago," Pacquiao said with a smile from the podium, referencing the long haul it took for the sides to finally make a deal for a fight that will easily be the richest in boxing history. "The fight is on, and we're very excited. Both of us will undergo hard training, and we will do our best on May 2 to make you happy."

When Mayweather came to the podium, he was low-key and soft-spoken.

"It's been a long road, but we're here now," Mayweather said. "May 2, the fight of the century. It's all about the best fighting the best, and Pacquiao is one of the best fighters of this era.

"Everything is about timing. I think we couldn't choose a better time. This is a fight that the world can't miss. It's an unbelievable matchup, action-packed fight. I'm in the gym working right now, dedicating myself to the sport, pushing myself to the limit because I never wanted to win a fight so bad in my life, and I'm pretty sure he is going to push himself to the limit because he wants to win it the same way I want to win it."

For more than five years, the fight has loomed as the biggest in boxing. But numerous ups and downs and contentious talks kept it from being made. The deal was finally signed Feb. 20, helped along by a chance meeting between the fighters at a Miami Heat basketball game in late January, and it was as though all the years of rancor and bad feelings over previous failed negotiations had never happened when the sides got together for the news conference.

The talk from the fighters and their teams -- and even rival television executives from HBO (which has a contract with Pacquiao) and Showtime (which has a deal with Mayweather), who had to make a deal for a joint pay-per-view to make the fight possible -- turned the proceedings into something of a lovefest.

"We're family. We're all part of this boxing family," said Top Rank chairman Bob Arum, Pacquiao's promoter, referencing the well-publicized animosity between the camps when he made his remarks from the podium.

Arum promoted Mayweather for most of his career until their acrimonious breakup in 2006, but even they shared some light moments. When Mayweather, sitting a few feet from Arum, smiled at one of his comments, he turned to Mayweather and said, "You missed me, right, Floyd?"

There was plenty of discussion about how big the fight will be. Most view it as a lock to break the pay-per-view buy record of 2.4 million for Mayweather's 2007 HBO PPV fight against Oscar De La Hoya and the pay-per-view revenue record of $150 million set by Mayweather's 2013 fight with Canelo Alvarez on Showtime PPV. Counting all streams of revenue, many believe the fight will generate more than $400 million.

"We had [Muhammad] Ali-[Joe] Frazier, we had [Sugar Ray] Leonard-[Roberto] Duran, we had Leonard-[Marvin] Hagler, and now we have Pacquiao and Mayweather," Arum said. "This is the biggest fight of its era. It's a great event for boxing. Everybody around the world is interested in this fight -- ambassadors, senators, celebrities."

"This is the super bowl of boxing," HBO Sports president Ken Hershman said. "They're the two greatest boxers of their generation. It transcends boxing for sure, and it probably transcends sports."

If there was any trash talk, it came from Freddie Roach, Pacquiao's Hall of Fame trainer, who was instrumental in getting the final round of negotiations going between Arum and CBS Corp. president Leslie Moonves, who oversees CBS-owned Showtime.

"I love challenges. This is the biggest challenge of my life," Roach said. "It's finally here and in front of me. I've been looking forward to this for a long, long time. We're in the fight of our lives, but we're gonna kick his ass. Good luck, Floyd."

Said Pacquiao, "He has a good defense, but I'm not worried about that. I can easily break that defense."

Mayweather (47-0, 26 KOs), 38, of Las Vegas, who stands to earn more than $100 million, is rarely flustered by comments from his foe. Asked about the magnitude of the bout, he said simply, "It's just another fight for me. He's a guy that I can not overlook. He's a very exciting fighter. It's an intriguing matchup."

Mayweather, who prides himself on his undefeated record, did mention that Pacquiao has lost before. Mayweather believes that is an advantage for him.

"I don't anticipate this being the hardest fight," he said. "That would be Miguel Cotto, [Oscar] De La Hoya and [Antonio] Margarito. I knew De La Hoya was fast, and I was moving up two weight classes [to fight him]. And Cotto I knew was a very hard puncher. And Margarito hit very hard and was much bigger than me. I don't see that in Floyd Mayweather. I don't see any of that."

Both fighters said they were happy the fight had finally been made.

"This is a very important fight, a big fight," Pacquiao said. "Last year, by November, I knew [the fight would happen]. I realized that it's time. I'm the one who is going to push it to make the fight happen, and it happened. That coincidence that we met in Miami, it helped a lot, a big help for this fight. [But] I knew it before that. I had faith that the fight would happen because Floyd had nowhere else to go."

Pacquiao gave into numerous Mayweather demands to get the deal done, including giving him the lion's share of the revenue.

"I agreed with what he wanted to do to make the fight happen, 40-60," Pacquiao said.

Mayweather and Pacquiao both are winding down their all-time-great careers, and Mayweather also said he was pleased the fight the public has wanted for so long is finally on.

They posed together before the news conference began and then again when the formal portion was over. Like it had been a half hour earlier, it was still hard to believe the fight was finally happening.

Floyd's Job: Be The Best Floyd I Can Be
Floyd Mayweather Jr. talks to Jeremy Schaap about his fight with Manny Pacquiao on Saturday, May 2.

Pacquiao: This Is A Historic Fight
Manny Pacquiao talks to Bernardo Osuna about his fight with Floyd Mayweather Jr. on Saturday, May 2.