McCarthy on Suh: 'No place for it' 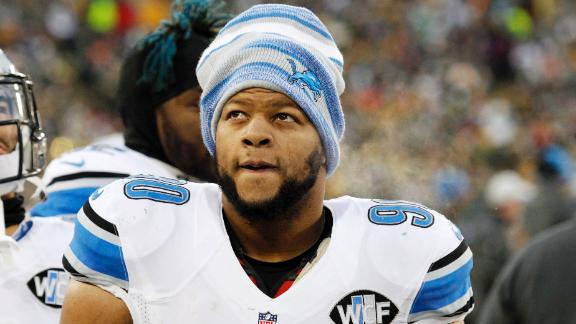 It happened in the fourth quarter of the Packers' 30-20 win over Suh's Detroit Lions on Sunday at Lambeau Field, and it just so happened to be the same leg that Rodgers reinjured in the second quarter.

"I didn't see it live, I didn't see it on the Jumbotron, but from what I'm told, I'm told it was ridiculous," Packers coach Mike McCarthy said. "There's no place for that. That's where I'm at with it. I don't understand it, frankly."

Rodgers appeared to try to shove Suh off his leg. Rodgers, who first strained his calf a week earlier against Tampa Bay, missed two series in the game while getting treatment in the locker room and returned with the game tied at 14-14. Rodgers completed 17-of-22 passes for 226 yards and two touchdowns in the win.

"He'll probably say it was an accident, he was getting blocked into him," Rodgers said. "That's what [referee] Walt Anderson said. But we'll see."

Rodgers tried to talk to Suh after the play.

"He was running off the field," Rodgers said. "I was talking to Walt actually. It was my calf and my ankle getting stepped on. So we'll see what happens."

Suh did not speak to reporters after the game, but Lions coach Jim Caldwell said he did not think it was intentional. There was no penalty on the play.

"I get briefed on it," Caldwell said. "Guys look at it and tell me what they saw, what they thought."

Caldwell said after last week's game that he believed Raiola's stomp was unintentional.

"I didn't see it, but there's some history there," Packers right guard T.J. Lang said. "So obviously until I see the play, I can have a better judgment call of that, but Aaron said he stepped on him and didn't really appreciate it, so."

Will Suh Be Suspended For Stepping On Rodgers?
Cris Carter and Mike Golic react to Ndamukong Suh stepping on Aaron Rodgers' lower leg twice during the Lions' loss to the Packers on Sunday.

Packers Clinch NFC North With Win
Despite missing time due to a calf injury in the first half, Aaron Rodgers threw for 226 yards and two touchdowns in Green Bay's 30-20 win over Detroit.