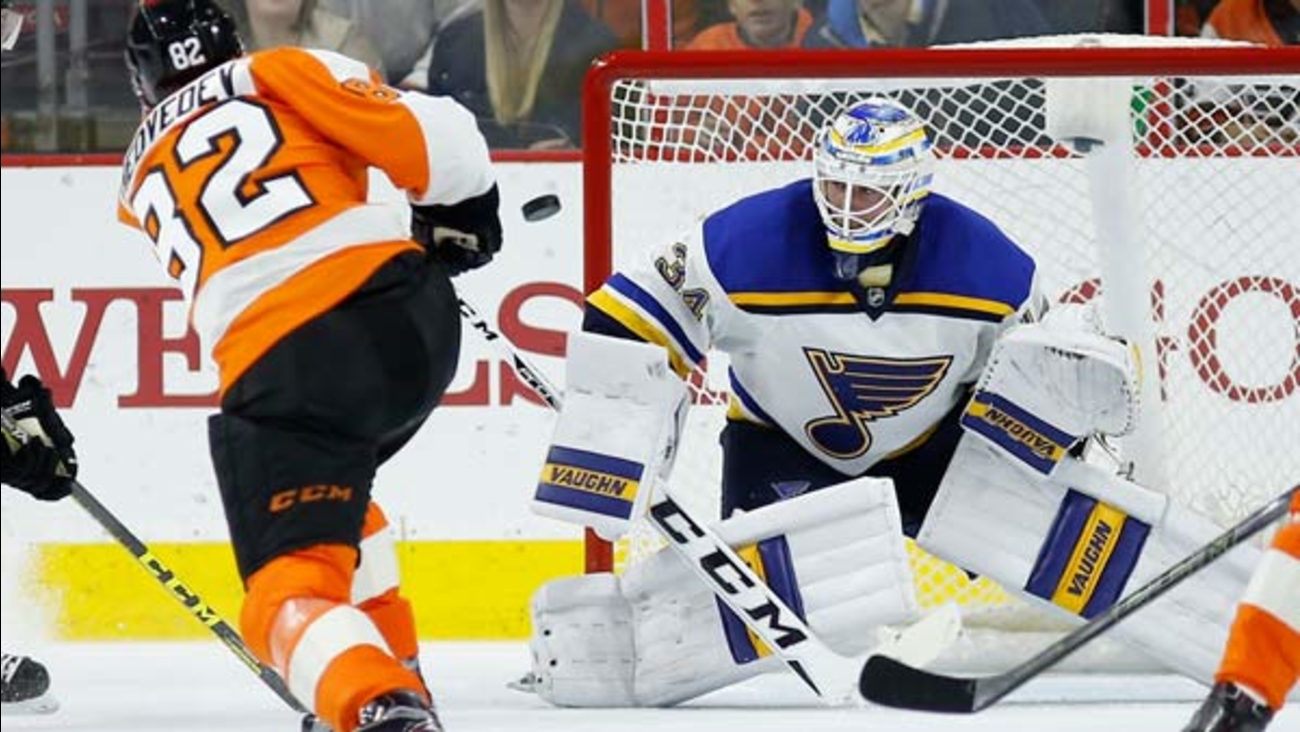 Evgeny Medvedev scored on a wrist shot with 3:13 left, lifting the Philadelphia Flyers to a 4-3 comeback victory over the St. Louis Blues on Monday night.

Wayne Simmonds had a pair of goals and Chris VandeVelde also scored for Philadelphia, which enters a five-day Christmas break with eight wins in its last 12 games.

Medvedev received a nice backhand pass from Ryan White and fired the puck high past Jake Allen on his blocker side.

Philadelphia came back from a 3-0 deficit to sweep the two-game season series with St. Louis.

Simmonds tied it 51 seconds into the third period with a rare power-play goal against the Blues, who entered leading the NHL in killing penalties at 87.8 percent. Jakub Voracek took the initial shot with a one-timer from just above the right circle, and Simmonds deflected it past Allen.

Voracek finished with two assists and has seven points (two goals, five assists) in four games since shifting to left wing. Shayne Gostisbehere also had a pair of assists for the Flyers.

The Blues jumped out to a 3-0 lead on Paajarvi's breakaway goal midway through the second period. The goal was set up when Philadelphia's Pierre-Edouard Bellemare fell down at the Flyers blue line. Paajarvi took the puck the other way and beat Steve Mason through the legs.

Bellemare made up for his gaffe a minute later when he stole a pass at center ice. Allen denied Bellemare's breakaway chance, but VandeVelde pounced on the rebound, and the short-handed goal pulled the Flyers to 3-1.

Simmonds finished a pretty 2-on-1 with Voracek with a one-timer from the slot that went high over Allen's glove hand, drawing Philadelphia to 3-2 with 7:47 left in the second.

Voracek missed a chance to tie the game just before the second-period horn when his wrist shot toward an open net went wide. He also misfired from close range 1:30 into the period.

Allen, in his first game against the Flyers, made 27 saves.

Fabbri gave St. Louis a 1-0 lead just more than 8 minutes in with a one-timer from the slot after Dmitrij Jaskin set him up with a pass from behind the net.

The Blues took a two-goal lead on Shattenkirk's power-play score with 5:09 left in the first period.

NOTES: The Flyers return to the ice Sunday night at Anaheim. . After Tuesday night's game at Boston, the Blues will have three days off. . Simmonds scored two goals in a game for the second time after also doing it in a 3-0 win at the New York Rangers on Nov. 28. . Philadelphia beat the Blues 4-2 in St. Louis on Dec. 10.