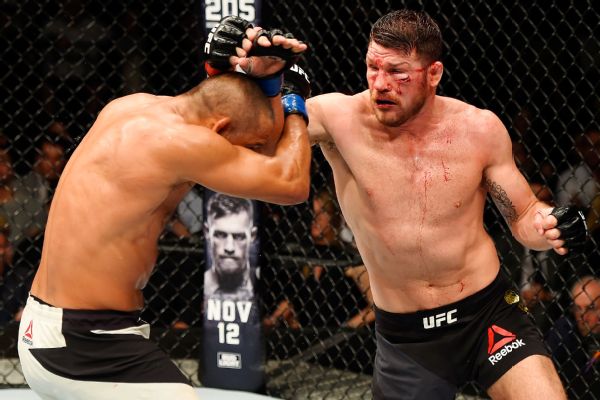 In recent months, Michael Bisping said getting revenge over Dan Henderson would be "better than sweet." In the end, it probably felt mostly like relief.

Bisping (30-7) successfully defended the UFC middleweight championship for the first time at UFC 204 on Saturday -- in a much closer fight than many expected.

The British champ outpointed Henderson (32-15) in a close, five-round unanimous decision at England's Manchester Arena. All three judges scoring the title fight had it in Bisping's favor: 49-46, 48-47 and 48-47.

The victory evened Bisping's score with Henderson at one win apiece. The two fought at UFC 100 in July 2009, when Henderson scored one of the most infamous knockouts in UFC history.

Bisping, 37, jumped at the opportunity for a rematch after his improbable title win over Luke Rockhold in June, even though Henderson was just 2-3 in his past five fights.

It proved to be a difficult first defense, as Henderson dropped Bisping twice in the opening two rounds. Bisping suffered a welt and deep cut under his left eye, and the wound bled throughout the 25-minute contest.

"I know people spoke and said, 'Oh, he's not the No. 1 contender,'" Bisping said. "This guy knocked me out cold. Cold. Worst knockout in UFC history. The jitters I had this week -- look at my face, for crying out loud. You know what this guy can do to you."

A former welterweight and middleweight champion in Pride Fighting Championship and former light heavyweight champion in Strikeforce, Henderson had promised he would retire after UFC 204 -- win or lose. He stuck to that decision on Saturday.

"This is the last time anyone will see me fight," Henderson said. "I gave my heart and soul to this sport. Fans like you, even though you booed me at the beginning of the night, made it worthwhile for me to compete year after year. I absolutely love this sport.

"Thank you, Michael Bisping, for giving me this opportunity -- my last fight, for the belt. I came up a little short. I wish they'd judge the fight on how you look after."

Henderson's right hand struck with about 40 seconds left in the opening round. The punch dropped Bisping in the center of the Octagon, and although he managed to tie Henderson up from the bottom and survive, he ate several hard elbows in the process.

Bisping regrouped and stole momentum back in the next frame, until another right hand dropped him a second time. Henderson did what he could to get a finish but did appear tired after failing to put Bisping away. His pace tapered way off in the third and fourth rounds, before he picked it up again in the fifth.

Jabs and leg kicks paved the way for Bisping's win, as he was able to dictate range and avoid the right hand as Henderson tired. Henderson did score a takedown late, but Bisping quickly scrambled back to his feet.

According to Fightmetric, Bisping outlanded Henderson in total strikes, 130-87. He attempted 348 total strikes compared to 227 for Henderson.

It's unclear where Bisping's next challenge will come from. Former champion Chris Weidman is scheduled to face Yoel Romero at UFC 205 on Nov. 12, while Rockhold is preparing to faceRonaldo "Jacare" Souzaon Nov. 19. Bisping, in his own way, encouraged each of them to make a statement.

"Weidman, what the hell? You lost. I've had three victories since you got your ass kicked by Rockhold," Bisping said. "Rockhold, I knocked you out in three minutes, buddy. Romero, you're suspended for steroids. Shame on you. And Jacare, you just got beat. Get off the couch and get a win."

With the win, Bisping moves into sole possession of the top spot on the all-time UFC wins list with 20.