Michael Malone calls out Nuggets for 'worst defense in the NBA' 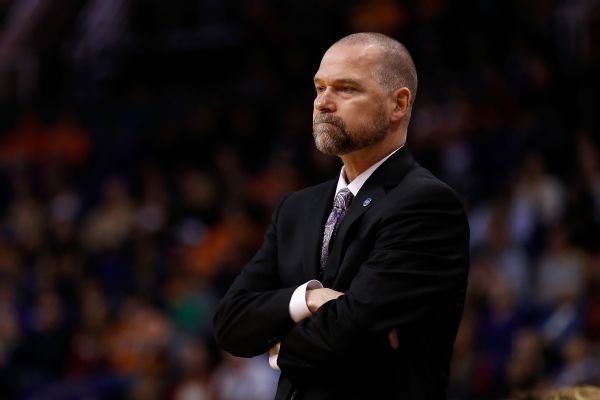 It's still early in the season, and the Denver Nuggets remain among the contenders in the West for a low playoff seed, sitting 1 games out of the eighth and final spot after a loss Tuesday night.

But to hear Nuggets coach Michael Malone tell it, all hope is lost -- and their defense and a void in leadership are to blame.

"It's a losing proposition," Malone told reporters after Denver's 120-113 home loss to the Sacramento Kings, the Nuggets' third straight defeat and fifth in seven games. "Offense sells tickets; defense wins championships. Right now our defense is the worst in the NBA."

"No veteran leadership stepping up, don't hear anyone speaking, taking the lead," Malone said. "We have two young guys trying to speak up on the team, which you applaud, but you need some leadership to shine and step up."

"We have the worst defense in the NBA," Malone said. "That is the bottom line. It is embarrassing how we go out and attempt to defend every night. That is something that we have to try and fix as soon as possible, because it's at an all-time low right now, and that is a huge concern of mine."

Forward Danilo Gallinari, a seven-year veteran who leads the Nuggets in scoring at 17 points per game, agreed with Malone's assessment.

"We have to take pride and change it," Gallinari said.

Gallinari added that it was up to the players to execute the game plan and make second efforts.

"We knew that going in that it was a very important game playing against a team that is ranked in the eighth spot," Gallinari said of the Kings after Tuesday's tilt.

Kings star power forward DeMarcus Cousins had his own theory on the Nuggets' struggles.

"Their bigs had a tendency to just want to lay on me and try to be physical," Cousins said. "They think it's about holding me up, and I took advantage of that and used their advantage against them."

Arron Afflalo had 19 points off the bench in his return to the Sacramento lineup, and Kosta Koufos scored 18.

Information from ESPN Stats & Information and The Associated Press was used in this report.