Michael Vick to wear No. 1 with Jets 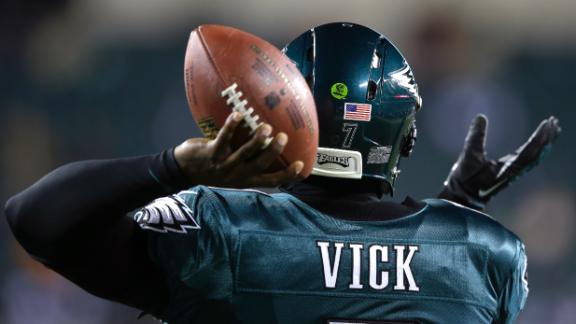 New York Jets quarterback Michael Vick called his first audible, announcing on Twitter late Friday afternoon that he has decided to wear No. 1, which previously belonged to punter Ryan Quigley.

After trying on the #8 I decided that it's not the right fit for me. I'll be going with the #1 officially. Thank You #JetsNation

- Mike Vick (@MikeVick) May 2, 2014This came one day after the Jets made it "official," announcing Vick would wear No. 8. He apparently didn't think eight was good enough. His beloved No. 7, of course, is worn by Geno Smith.

Vick had worn No. 7 throughout his NFL career with the Atlanta Falcons and Philadelphia Eagles. After signing with New York in March, Vick said he had no intentions of asking Smith for the number.