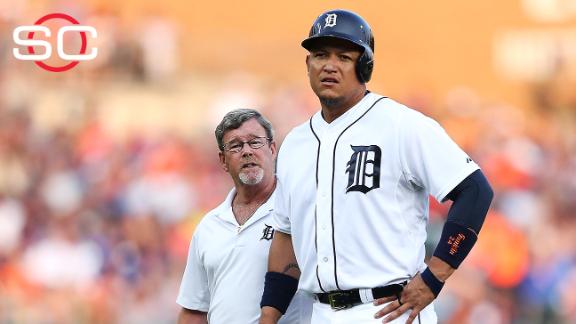 The Detroit Tigers placed two-time AL MVP Miguel Cabrera on the 15-day disabled list for the first time in his career Saturday due to a calf injury.

The first baseman is expected to miss at least six weeks.

"It is a Grade 3 calf strain, and it's probably going to be six weeks," Tigers manager Brad Ausmus said before Saturday's game against Toronto. "When you lose the best hitter on the planet, it's a huge blow."

Grade 3 is the most severe of the strains.

Cabrera left Friday night's 8-6 win over the Toronto Blue Jays in the fourth inning when he strained his left calf while breaking for second base on an attempted hit-and-run. An MRI showed no injury to his Achilles tendon.

Cabrera's calf injury overshadowed Anibal Sanchez's no-hit bid for the Tigers, which was broken up when former Detroit teammate Ezequiel Carrera lined a single to left with one out in the eighth inning. Cabrera was on first base with no outs in the fourth inning and a 3-2 count to Victor Martinez, and he took off with the pitch. Martinez fouled the ball off, but Cabrera pulled up sharply, grabbing his left leg. He was attended to by trainers and limped off the field.

In the past two seasons, Cabrera played through a sports hernia, a broken bone in his foot and bone spurs in his ankles.

"It's going to be tough without him, for sure," catcher Alex Avila said. "There's no secret about that. We just need to keep it as close as possible to be able to make a run when he gets back."

Detroit selected the contract of third baseman Jofry Marte from Triple-A Toledo. Marte, who has played 10 minor league games at first, was hitting .271 for the Mud Hens and has not played in the major leagues.

With Victor Martinez unable to play the field because of knee problems, the Tigers don't have an obvious replacement for Cabrera. Ausmus plans to rotate the spot while team president Dave Dombrowski seeks a longer-term solution.

For Saturday's game against Toronto, Ausmus put Avila in the lineup at first base -- his first career start at the position, although he has played it three times as a midgame replacement.

"I can't sit here and say we'll be fine, because he's the best hitter in baseball, at least in my eyes," Tigers right fielder J.D. Martinez said after Friday's game. "But if you look at our lineup, we've still got a lot of weapons."

A nine-time All-Star, Cabrera will miss this year's game at Cincinnati on July 14. He led AL first baseman in the latest fan balloting update with nearly 11.6 million votes.Kansas City'sEric Hosmer was second at 9.15 million.

Final totals are to be announced Sunday.

Cabrera placed on DL for first time in career
Tim Kurkjian discusses the Tigers' decision to place Miguel Cabrera on the 15-day DL with a left calf strain and how that affects Detroit's playoff chances.