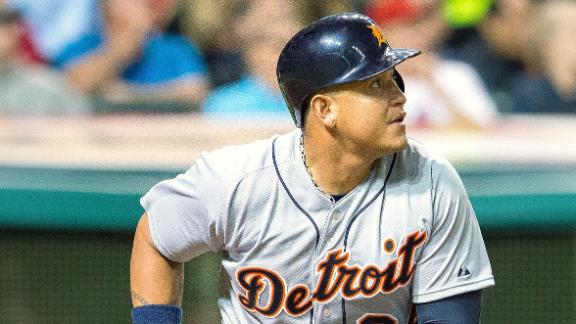 Miguel Cabrera was merely joking with teammates in the Detroit Tigers' clubhouse when it was reported that he plans to forgo his postseason bonus because "I just want the ring," a Major League Baseball Players Association official told ESPN.com on Thursday.

Cabrera is expected to sign the necessary forms and receive his postseason bonus money, according to multiple sources.

USA Today Sports reported that Cabrera was sitting at his locker Wednesday when teammate Max Scherzer approached him with the paperwork that would allow him to collect his postseason check.

According to the newspaper, Scherzer shrugged and walked away.

A full share of the postseason bonus for players on last year's World Series-winning Boston Red Sox team was worth $307,000. Portions of the bonus also are allocated to support staff such as clubhouse attendants.

Cabrera signed a 10-year contract worth nearly $292 million with the Tigers last offseason. He has won two straight MVP awards -- but just one World Series ring, with the Florida Marlins in 2003.

Cabrera declined comment to ESPNDeportes.com when asked about the story before Detroit's American League Division Series opener against Baltimore on Thursday.