Mike Pettine: I respect Russell Wilson, but QB not in top tier 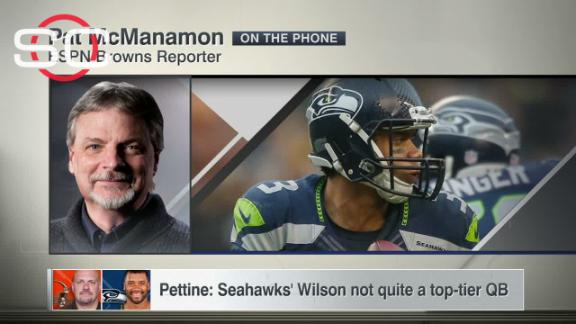 He does, however, put him in the next group.

"Would you put him there with the guys that can transcend their supporting cast? The [Tom] Bradys, whether it's Aaron Rodgers, [Drew] Brees, [Ben] Roethlisberger, the ones that you would consider the two, three, four elite guys? No. But he's certainly played himself into that next tier," Pettine said Wednesday.

The Browns travel to Seattle on Sunday to play a team that has been carried by Wilson over the past four weeks. In those four games, Wilson has a passer rating of 145.9, with 16 touchdowns and zero interceptions.

"I don't worry about that," Wilson said when asked about Pettine's comments. "I think it comes down to winning games. ... That's the only thing I care about."

On Thursday, Pettine attempted to clarify his comments during an interview on SiriusXM NFL Radio.

"I have a ton of respect for Russell and what he's done and I've been in this league a long time and I've gone against those guys that you mentioned," he said. "He is playing at a high level and if that continues for several more years then you would be able to talk about him in terms of those guys who have done it for 10-plus years as you just mentioned.

"To sit and take one fragment of what I said just because I'd gone against Tom Brady, it's not my job to rank quarterbacks and I know the bottom line for those guys, and he's said it himself, is to win football games. And he's one of the best at that. I don't get too wrapped up in that. This isn't the first time that I've said a lot of one topic and one small fragment of it was made into a headline."

Wilson's career passer rating is 101.3, and his 44 regular-season wins match Ravens quarterbackJoe Flacco as the most to start an NFL career. He's also won a Super Bowl and played in another.

"He plays at a high level; he's very productive and they win," Pettine said Wednesday. "Now a lot of that I think is a function, too, is he's the perfect quarterback for what they do. To me it goes both ways. They've also built it around him."

Pettine also was asked to compare Wilson and his own quarterback,Johnny Manziel.

"I think the first [thing] is the experience level," Pettine said Wednesday. "Wilson has been in the league longer and has been in the system longer and just has played more. ... I don't know how many starts he has total compared to the five that Johnny has.

"You can certainly see the similarities. They've done a nice job up there kind of building the package around him. He's more of a runner than we see in Johnny. I'm talking about called quarterback runs. Do we have some zone-read stuff and putting the QB on the move? We do that, but [Wilson's] I think thicker built and can withstand some of the shots in the run game more so than we would want to expose Johnny to.

"Johnny will get his rushing yards when the pocket breaks down and he has to get out. That's where Wilson's done a good job as well, when he's been forced to get out of the pocket he's a threat to scramble for the first down.

"But I think where his game has really taken off is his eyes are down the field more so now. He's made a lot of big plays with throws on the run."