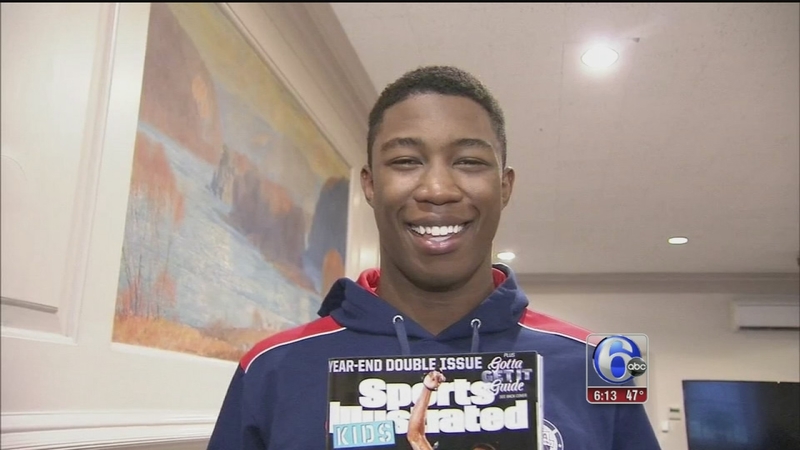 PHILADELPHIA -- A local swimmer just became the second young athlete from the Philadelphia area in a row to hold the title of SportsKid of the Year by Sports Illustrated Kids.

15-year-old Reece Whitley of Lafayette Hill, Pa. was chosen from among thousands of his peers across the country and even appeared Monday morning on Good Morning America.

He stands tall at 6'8 and already holds five national age group records including winning the 200-meter breaststroke at the 2015 Speedo Junior National Championships.

"Just to see my face on the cover, I think it was really cool," Reece, a sophomore at Penn Charter High, said.

His predecessor, Mo'ne Davis, held the magazine's honor last year, which applauds student athletes' accomplishments in their sport and in their community.

"I think the way he looks at life in general is that he's going to be a better person, unless he's done something to make everyone around him a better person, I think that's what makes him tick," Reece's mother Kim Smith-Whitley said.

Along with appearing on GMA, Reece received a tweet from First Lady Michelle Obama offering her congratulations.

"I expected a tweet or two from national teamers that are members of USA Swimming, but nobody at the caliber of the first lady, she doesn't tweet about just everybody, so I think that it's really special," Reece said.

But the young swimmer isn't just breaking records in the lap lanes.

Studies show 70% of African American children don't know how to swim. That's something he hopes will change.

Yep, he's 6'8"...@_reecewhitley talks to @6abc about being named sports kid of the year by sports illustrated. pic.twitter.com/MxZ5ajYHdV

Reece says he is already thinking of Olympic trials for next summer.