Montee Ball one of two players waived after Broncos' additions 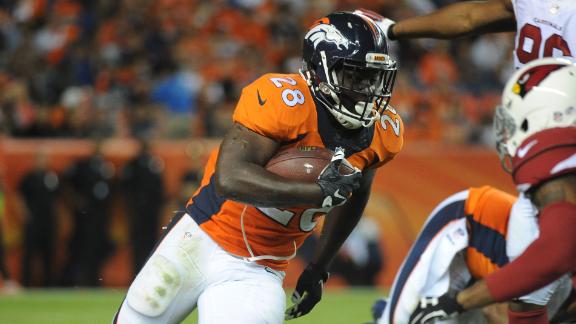 ESPN
By Jeff Legwold
ENGLEWOOD, Colo. -- When the Denver Broncos' top football decision-maker, John Elway, said the roster was "fluid'' after the cut to 53 players Saturday, he meant it. So much so that running back Montee Ball, a second-round pick by the team in 2013, got caught up in the swirl.

Ball, who had tumbled from No. 2 on the depth chart to No. 4 in the final weeks of the preseason, was one of two players waived Sunday -- center Gino Gradkowski was the other -- when the Broncos claimed rookie tight end Mitchell Henry and center James Ferentz.

"We still think that Montee, hopefully, can continue to improve,'' Elway said Saturday. "He was in the top 53 in our minds, so that's why Montee's here, and we still have high expectations for Montee.''

It has been an odd depth-chart free fall for Ball in recent weeks. Ball spent all of the offseason program and virtually all of the preseason as the team's No. 2 back.

Then Ronnie Hillman simply raised eyebrows every time he touched the ball, reminding how good a zone-scheme back scouts believed he was when he came into the 2012 draft as a 20-year-old. Hillman closed out the preseason with a gaudy 7.4 yards per carry and a tight grasp on the No. 2 spot on the depth chart behind C.J. Anderson.

Then Juwan Thompson continued to run hard, do the right things in a variety of situations and maintain his long list of special-teams duties as well. Thompson moved past Ball in the pecking order in the days leading up to the Broncos' third preseason game.

Many within the organization said Anderson, Hillman and Thompson simply kept their edge, performed better day-in, day-out in practices and showed more in the early preseason outings than Ball. Many wanted to see Ball be more decisive with the ball in his hands.

Following the preseason finale against the Cardinals on Thursday night, when Ball struggled behind an offensive line filled with reserves (27 yards on 16 carries), Ball said he was surprised by how things had played out as the preseason drew to a close, adding: "I didn't expect it to come this way.''

The Broncos said they factored in the situations they put Ball in during the preseason, especially in the finale. Ball said after that tough night, running backs coach Eric Studesville told him, "I did everything I was supposed to'' in terms of assignments.

"Montee is a good football player,'' coach Gary Kubiak said Saturday. "The other night, the opportunities weren't really good. I said that after the game. I know he got to carry the ball a lot, but we didn't do a good job up front for him as far as giving him a lot of room to work. He's had a good camp and he's a good football player. He earned the right to be on the 53. ... It's up to us to find a way to get them involved with what we're doing, and special teams will be a big factor.''

Ball, who opened the 2014 season as the starter before missing all but five games with a groin injury, rushed for 731 yards in two seasons with the Broncos. In his rookie year in 2013, he finished with 559 yards rushing as Knowshon Moreno's backup.