Montee Ball to have appendectomy 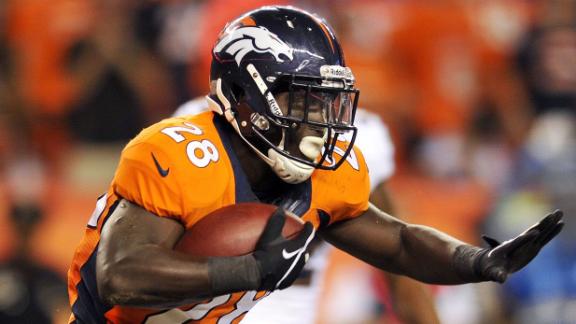 ESPN
By Jeff Legwold
ENGLEWOOD, Colo. -- Denver Broncos running back Montee Ball was scheduled for an appendectomy Monday afternoon and will likely miss the remainder of the team's preseason work.

Ball, who is the team's No. 1 back, is expected to be ready for the regular-season opener Sept. 7 against the Indianapolis Colts.

"He started feeling the effects, not feeling really good yesterday and then of course came in today not feeling very good, which is typical of that prognosis," Broncos coach John Fox said after Monday's practice. "Our medical people got him to the doctor and determined that's what it was. It didn't explode or anything, the bad end of that. It's really a blessing we caught it now."

With Ball out of practice, Ronnie Hillman had most of the carries for the first-team offense, with C.J. Anderson also getting a smattering of snaps with the regulars.

Ball did participate in the Broncos' scrimmage Saturday, carrying the ball twice for eight yards.

He took to Twitter early Monday afternoon to thank fans for their support.

I appreciate the get well wishes everyone! I will be ok and come back stronger than ever!! #Broncos

- Montee Ball (@ballrb28) August 4, 2014"I texted him to make sure he was all right," Hillman said. "... You always want to be ready if they need you, so I'm just trying to be ready for whatever they need me to do until Montee gets back."

Ball was moved into the starting role during the offseason after the Broncos elected to let Knowshon Moreno go in free agency. Moreno finished with a career-best 1,038 yards rushing last season to go with 60 receptions, but the Broncos had concerns about his history of knee troubles and believed Ball was ready for the promotion.

"He's really grown a lot as far as his understanding of the offense and execution of all parts of his job," Fox said.

Fox added that he had no concerns about Ball keeping up in the meeting room once he gets out of the hospital, saying: "Knowing what kind of guy he is ... mentally he'll stay on top of his game."

Hillman is expected to start the preseason opener Thursday against the Seattle Seahawks.

Montee Ball To Have Appendectomy
Chris Mortensen discusses Broncos RB Montee Ball, who will undergo an appendectomy but is expected to be ready for the start of the regular season.
Related topics:
sportsespnnfldenver broncosappendectomymontee ball
Copyright © 2020 ESPN Internet Ventures. All rights reserved.
More Videos
From CNN Newsource affiliates
TOP STORIES