Natalie Achonwa out for tourney 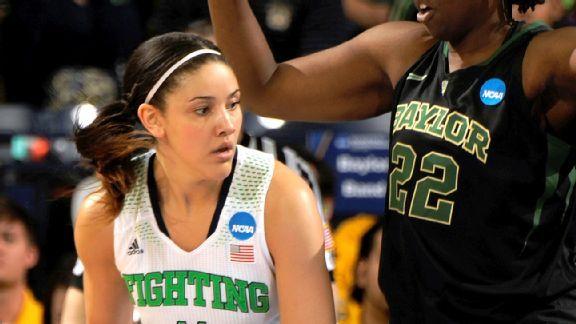 SOUTH BEND, Ind. -- Notre Dame forward Natalie Achonwa will miss the Final Four with a left knee injury, a big blow to the national championship hopes of the Fighting Irish.

Coach Muffet McGraw said Achonwa tore her anterior cruciate ligament in Notre Dame's 88-69 victory over Baylor on Monday night, calling it devastating for the senior but not for the title hopes of the Irish (36-0).

"We still believe," McGraw said. "She got us to this point, now somebody else has to finish it."

Notre Dame will face Maryland, a 76-73 winner over Notre Dame, next Sunday.

Achonwa was third on the team at 14.9 points per game, but the Irish will miss her most on the boards since she led the Irish in rebounding with 7.7 per game. McGraw said the 6-foot-3 forward, named a third-team All-American earlier in the day, was playing her best basketball of the season.

Geno Auriemma, whose UConn Huskies could meet the Irish in the national championship game, took to Twitter to show his sympathy.

All other issues aside I was sick to my stomach when I heard about Natalie Achonwa tearing her ACL. I've been there and I feel for her.

- Geno Auriemma (@genoauriemma) April 1, 2014Taya Reimer will most likely start in Achonwa's place, but McGraw said the Irish aren't counting on the 6-3 freshman who is averaging 6.7 points and 4.1 rebounds to replace Achonwa by herself. McGraw has repeatedly said she believes the Irish have the best bench in the country and said everyone must step up.

McGraw said the Irish could use a four-guard offense more with Achonwa out and might try some other things.

She said Achonwa's leadership is what the Irish will miss most. Achonwa showed her leadership shortly after sustaining the injury with just under 5 minutes remaining against Baylor, yelling from under the basket toward the Notre Dame bench exhorting her teammates to protect the home court.

After all, Notre Dame is the birthplace for the "Win one for the Gipper" speech.

"There absolutely is a win-one-for-Ace," McGraw said. "I think it's so important to really rally around this."

Achonwa will have surgery on the knee at a later date. She started 33 games this season, posting career-high averages in points, field goal percentage (.611), assists (2.8 per game) and blocked shots (1.2 per game). She ranks fourth on Notre Dame's all-time list of rebounders with 970.

Achonwa Injured In Notre Dame Win
Notre Dame forward Natalie Achonwa discusses the injury she suffered late in the game against Baylor and advancing to the Final Four.