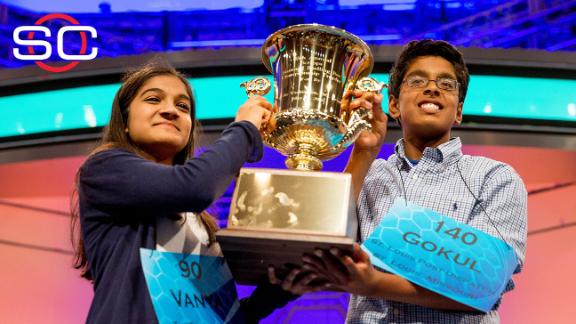 OXON HILL, Md. -- They couldn't be rattled. They couldn't be denied. Gokul Venkatachalam and Vanya Shivashankar had worked too hard and come close too many times not to win the Scripps National Spelling Bee.

So they shared the title Thursday, making history in two different ways.

The bee hadn't ended in a tie for 52 years -- until last year. Now it has happened for an unprecedented two years running.

Shivashankar, 13, of Olathe, Kansas, is the first sibling of a past champion to win. Her sister, Kavya, won in 2009.

Shivashankar's final word was "scherenschnitte," which means the art of cutting paper into decorative designs. After being informed he'd be the co-champion if he got the next word right, Venkatachalam didn't even bother to ask the definition before spelling "nunatak." For the record, it means a hill or mountain completely surrounded by glacial ice.

"I knew it right away," he said. "I didn't want to keep everyone waiting."

Venkatachalam, 14, of Chesterfield, Missouri, finished third last year, behind the two co-champions. He had a gruff onstage demeanor, confirming a word's roots and definition before chugging through the letters as if he had dinner plans.

Under his blue-and-white button-down shirt, Venkatachalam wore the jersey of his idol, LeBron James.

Venkatachalam hopes to attend Stanford and become an entrepreneur or stockbroker. But his immediate priority is to watch the NBA Finals.

While Venkatachalam wowed the crowd with his machinelike efficiency, Shivashankar has been the darling of the bee since she made her debut as a vivacious 9-year-old in 2010. Also an actress, she was poised and graceful, smiling and nodding when she got a word she knew instantly -- which was nearly every time.

Both are eighth-graders, so it was their last chance. Shivashankar was competing in the bee for the fifth and final time. Her sister, Kavya -- now a sophomore at Columbia University -- competed four times, which means the Shivashankar family has made the trip nine of the past 10 years.

Vanya Shivashankar, who also acts and plays the tuba and piano, dedicated her victory to her late grandmother, who died in 2013.

"Everything takes hard work and passion," Shivashankar said. "That's definitely what I put in, and I know Gokul put that into this endeavor as well."

Shivashankar aspires to be a cardiac surgeon. In the meantime, she hopes to devote more time to acting and persuade her family to take a Caribbean cruise this summer.

"It's definitely going to be weird not doing spelling in high school," she said.

Proving their superiority over even their toughest competitors, Shivashankar and Venkatachalam went head-to-head for 10 rounds before the list of 25 championship words was exhausted.

"It was on our list," said Mirle Shivashankar, Vanya's father and spelling coach. "But I couldn't remember it."

Before the bee began, executive director Paige Kimble predicted it would be another 50 years before it ended in a tie. Now she's thinking differently.

"I think it's time to consider that the bee may be entering a new era where the level of competition is so intense that we need to entertain this as a possibility every year," she said.

The past 10 winners of the bee, and 14 of the past 18, have been of Indian descent, a run of dominance that began in 1999 with Nupur Lala's victory, which was later featured in the documentary "Spellbound."

Shivashankar and Venkatachalam each will receive more than $37,000 in cash and prizes, and while they held up the trophy together as they were being showered with confetti, each will get one to take home.

Cole Shafer-Ray, 14, of Norman, Oklahoma, who was making his first appearance in the finals, finished third. 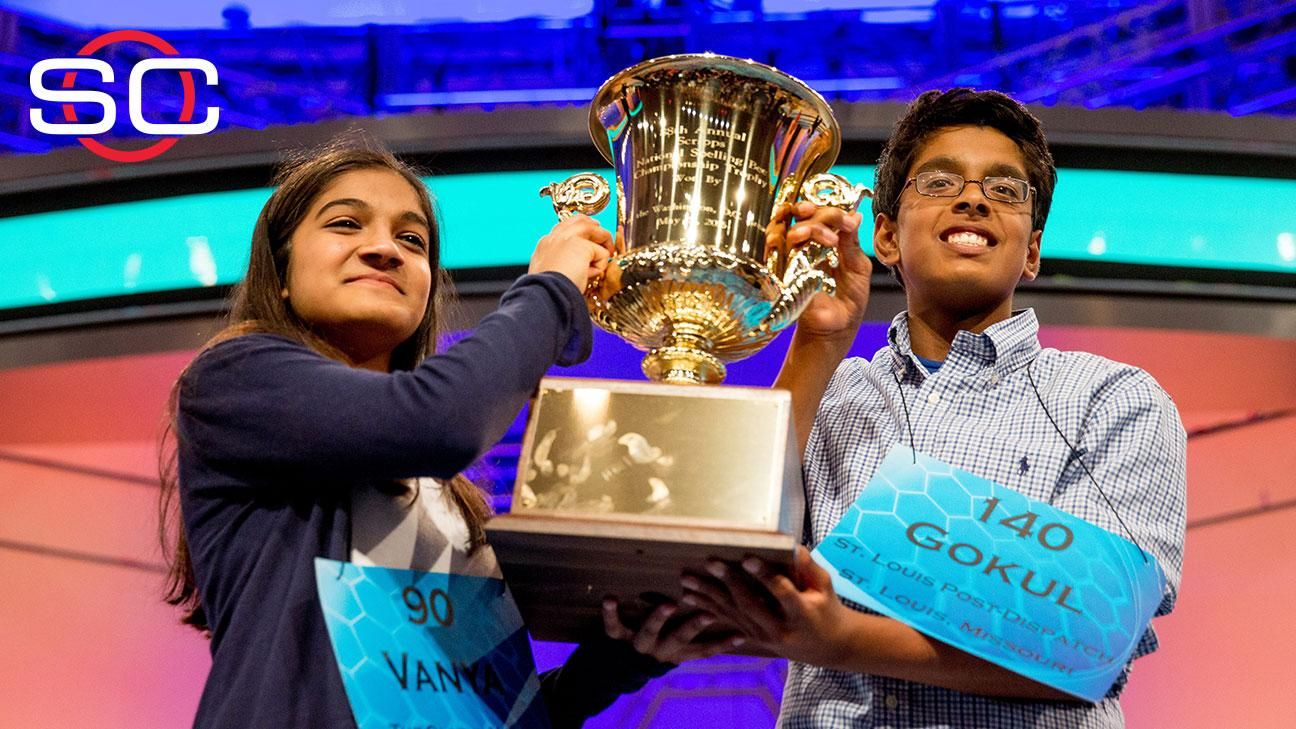