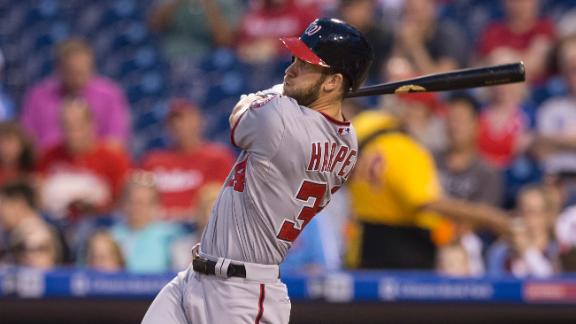 Slugger Bryce Harperhas voiced his support for Washington Nationalsmanager Matt Williams amid rumblings the field boss could be on the hot seat as the season draws to a close.

Harper keyed a Stephen Strasburggem Tuesday night at Philadelphia with a solo homer to center field in the first inning, an RBI single in the third and a two-run shot to left in the eighth, hugging Williams when hereturned to the dugout after the second blast.

"He does everything he can to help me," Harper said after the 4-0 victory. "He's unbelievable with the mind game, talking about hitting."

There has been speculation Williams could lose his job because the talented Nationals have underachieved this season, but the team's best player gave him a strong endorsement.

"I love him as a manager. If I didn't, everybody would know it," Harper said. "He wants us to be perfect, and I love that."

"Just being able to have the fire, the intensity that he has and the way he approaches every single day," Harper told reporters, according to MASNSports.com. "He wants us to be perfect, and I love that [in] a manager. I played for a guy like that in high school, and my dad's exactly like that also. So being able to come in every single day and have that approach to win ballgames and playing for a guy like that is fun."