Nationals' Ian Desmond: 'Don't know what to do' after six costly errors 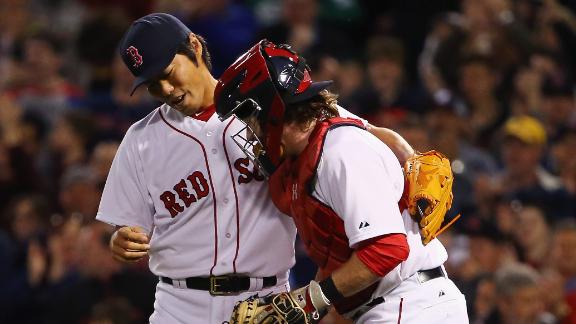 Washington Nationals shortstop Ian Desmond, who has made six errors in eight games, is at a complete loss for his struggles in the field.


His latest gaffe led to three unearned runs in the seventh inning of an 8-7 loss to the Boston Red Sox on Tuesday night. After misplaying a ground ball by Hanley Ramirez to start the inning, Desmond later didn't make a throw home -- "I just ate it," he said -- on a chopper by Brock Holt as the eventual winning run crossed the plate.


"It sucks," Desmond told reporters after the game. "I don't know what to do. I'm doing everything I can. Sitting here answering questions after every game is brutal. But, I mean, what am I gonna do?"

All of Desmond's six errors -- which is more than 18 major league teams have at this point -- have come in losses, and five of them have led to 10 unearned runs. By comparison, he committed 24 errors last season and 20 in 2013.


"Do I worry about it? Of course," Desmond told reporters before the game. "Do I want to get out of it? Of course. I don't ever want it to be part of my game. Every day, I come to the field thinking, 'This is gonna be the day where it goes away.' I do everything I can on the field to get rid of it mentally and physically."


The shortstop, who is the only player in baseball to hit at least 20 home runs and steal at least 20 bases in each of the past three seasons, even tried to shake things up by changing his appearance. He showed up at the ballpark clean-shaven and with a new haircut.


"He knows that fielding slumps, like hitting slumps, come and go," general manager Mike Rizzo told the Washington Post. "He has the track record that proves he's one of the elite shortstops in the game.


"We're undermanned and playing poorly. It's a bad combination. But slumps start and end with one at-bat. You don't know when that at-bat's going to be. Your next at-bat starts you on a hot streak. Your next win starts you on a win streak."


Desmond hopes that's the case too. Hitting just .115 entering the game, he had three hits Tuesday to raise his average 85 points to .200. He also hit a home run Wednesday against Boston.


Nationals manager Matt Williams,however, would like that hot streak to start as soon as possible as the team has stumbled out of the gate with a 2-6 start.


"It's the same recipe," Williams said. "If you put all the ingredients together the same way every time, then you're going to get the same meal."