Nationals' Stephen Strasburg feels pinch in elbow, will have MRI 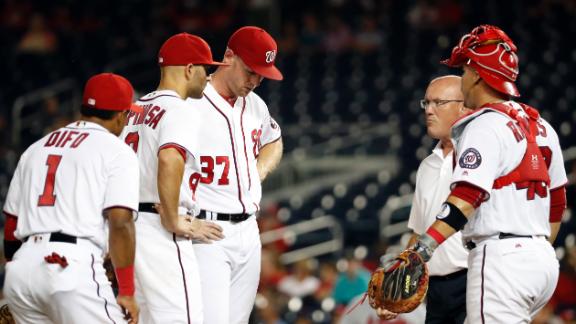 Washington Nationals ace Stephen Strasburg felt a pinch in the back of his elbow and was forced to make an early exit Wednesday night in his first start since returning from the disabled list.

Strasburg will have an MRI on Thursday, Nationals manager Dusty Baker said. Baker said Strasburg had felt a pinch but didn't elaborate on the severity of his injury.

Strasburg had been out since Aug. 17 because of soreness in his right elbow. He left after 2 innings, allowing a run on two hits, before National League East-leading Washington went on to defeat Atlanta 5-4 in 11 innings.

"He had good command," Baker said. "Usually if something's wrong you don't have command. So we're hoping that it's something minor, but we'll find out tomorrow."

With Braves pitcher Mike Foltynewicz attempting to bunt, Strasburg threw an 0-2 pitch that sailed high. Strasburg winced, walked around the mound and then threw another pitch, striking out Foltynewicz.

Washington's trainer then came out and spoke briefly with Strasburg, who soon departed. Strasburg was replaced by Sean Burnett, who gave up an RBI single toAdonis Garcia.

Strasburg gave up one run and two hits in 2 innings with four strikeouts and no walks, throwing 42 pitches. He exited with a 1-0 lead.

Strasburg wasn't in the clubhouse after the game.

"He didn't stick around because he's just both frustrated and upset," Baker said.

Before going on the disabled list, Strasburg allowed 19 runs over his final three starts, including nine over 1 innings in a loss to Colorado his last time out. In his first 17 starts, he was 13-0 with a 2.51 ERA.

It was Strasburg's second stint on the disabled list this season. The right-hander missed 17 games in June with an upper back strain.