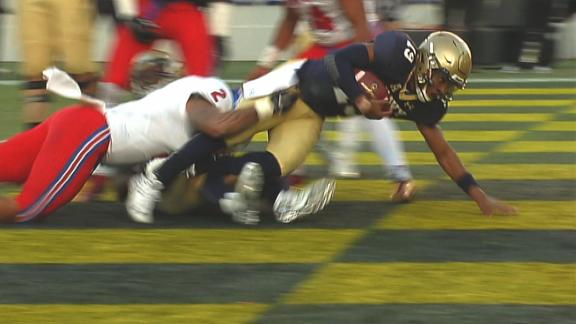 Navy quarterback Keenan Reynolds broke the FBS record for career rushing touchdowns when he scored for the 78th time in Saturday's 55-14 blowout ofSMU.

Reynolds set the record on a 4-yard run in the first quarter to give No. 20 Navy a 7-0 lead. He added three rushing scores later in the game to bring his season total to 17.

"When Coach called the play, I was like, 'I am not getting tackled,' " Reynolds said after the game. "I am scoring. I was tired of talking about it, when it's going to happen. I was ready to get it over with."

After the record-breaking score, Navy coachKen Niumatalolosent the team's equipment manager onto the field to secure the ball as a souvenir for Reynolds' keeping.

The senior surpassed the mark set by former Wisconsin running back Montee Ball.

The NCAA record of 84 rushing scores belongs to Adrian Peterson, who played 42 games between 1998 and 2001 forGeorgia Southern.