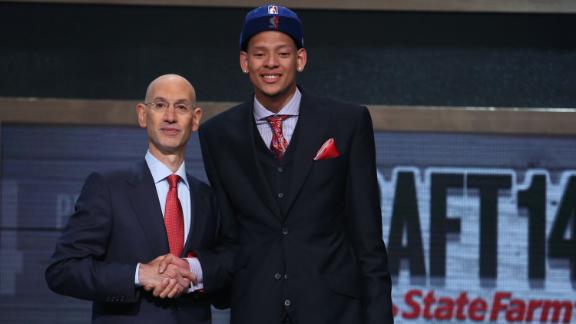 NEW YORK -- Between the 15th and 16th picks in Thursday night's draft came a very special selection by the NBA.

Commissioner Adam Silver announced at that point that the NBA would let Isaiah Austin fulfill the dream of every young player, making him a ceremonial pick.

Just over a week ago, the sophomore center from Baylor was diagnosed with Marfan syndrome, a rare genetic disorder that affects the heart. It ended his playing career.

The illness was discovered during a physical for the draft.

"For Commissioner Silver to even invite me here was a tremendous blessing and it just shows how much class that man has," Austin said. "It's really been a tough week for me, and it's been really rough. I've just had a tremendous amount of support from everybody around the world, telling me they're praying for me and everything. I can't thank everybody enough."

The crowd at Barclays Center rose to its feet as Austin, sitting in the waiting area with most of the first-round picks, hugged family members and put on a generic NBA cap. He went up to the stage and posed with Silver, just as all the drafts picks do when they are called.

During the season, the 7-foot-1 Austin revealed he had a prosthetic right eye after multiple operations couldn't repair a detached retina.

Austin, expected to be a high pick when healthy, said he felt he has "a great story to share." He said Baylor coach Scott Drew has already offered him a coaching position with the Bears.

"I have a whole life ahead of me," Austin said. "I'm not going to sit here and I'm not going to sulk about not being able to play basketball anymore, because I can still be involved with the game somehow or some way."

Austin said there was plenty to enjoy on what would have been his draft day.

"Just being around all the draftees and seeing my friends get drafted, it just brings joy in my heart because I know how hard we work to get to this point," Austin said. "I've been through it. ... Just to see how people persevere through their own problems, because everybody has their own problems. It's touching and it's heart-warming, really."

Minutes after Austin made the walk across the stage, there were comments on social media.

Happy Isaiah Austin was able to hear his name called at the NBA draft. Very cool to see.

Adam silver is such a classy man! That's love right there. I'm emotional for him. Damn I love that

"I want people to know they can push through anything, because I've done it," he said. "I just want them to know they have the power within themselves to do it if they keep faith and a positive attitude."

NBA Honors Austin With Ceremonial Pick
The NBA recognized former Baylor center Isaiah Austin, who is no longer able to play competitive basketball due to a genetic disorder called Marfan syndrome, with a ceremonial draft pick.