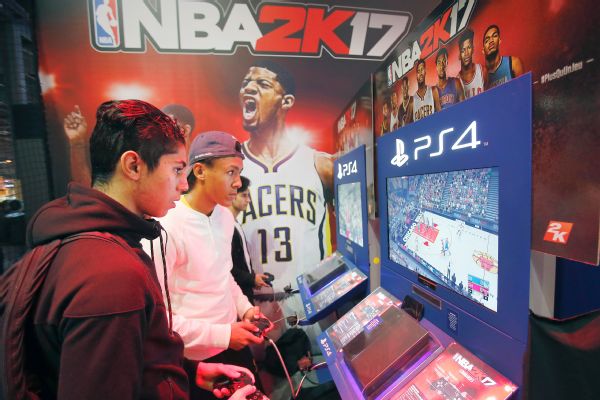 The NBA and Take-Two Interactive Software, makers of the mega-popular NBA 2K video game, are partnering to form a first-of-its-kind esports league centered around the NBA 2K series, officials from both companies told ESPN.com on Wednesday.

The NBA 2K eLeague, tentatively set to begin play in 2018, eventually will feature 30 NBA 2K teams, each owned by one of the real-life NBA franchises, according to NBA commissioner Adam Silver and Strauss Zelnick, the CEO of Take-Two. The teams, comprised of five human players, will play out a five-month season that mirrors the real NBA season. It will proceed through a regular season of head-to-head games and then to playoffs and a championship matchup.

Silver declined to detail the NBA's initial level of investment in the league, but it's clear both companies view it as a huge potential moneymaker.

"The financial consequences could be substantial," Zelnick said.

Specifics on schedule, structure and even a salary cap still are hazy. All 30 NBA franchises are interested in participating, but some might not be ready when the eLeague tips, Silver said. The NBA hopes at least half its franchises will have teams in the eLeague by 2018, Silver said.

The NBA will hold an initial draft of esports players, and each NBA franchise will pick five to play as its eLeague team. They will draw salaries, train and essentially treat the NBA 2K eLeague as full-time jobs during the season.

Real NBA players will not be represented as avatars in the NBA 2K games, Silver and Zelnick said. Competitors will design on-screen avatars based on their own stylistic preferences.

Other NBA owners have independently invested in esports over the past two years.

The owners of the 76ers last year purchased the esports giant Team Dignitas, which has teams across various leagues that focus on several popular games -- including League of Legends.

The Rockets hired a director of esports and are investigating investment opportunities across the industry.

Owners of the Bucks, Grizzlies and Warriors have all made sizable investments in esports teams and players.