NBA vs. NFL -- Which league does London better? 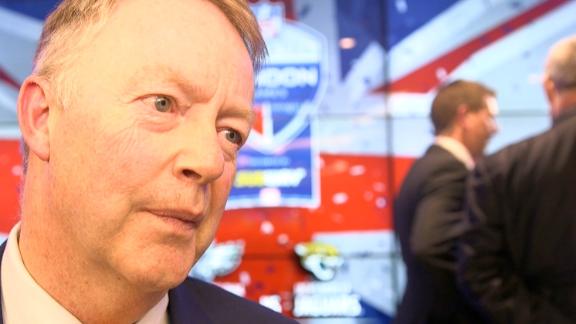 LONDON -- It's tough to compete with the NFL.

In what is likely no coincidence, the powerful gridiron league unveiled the schedule for its annual London games on Thursday -- just hours before the NBA's much-hyped London showcase featuring the Boston Celtics and Philadelphia 76ers.

Boasting the richest sports league in the world -- where even the winless Cleveland Browns are worth an estimated $2 billion -- the NFL appears to be reminding its little brother from across the pond who is boss when it comes to bringing American pro sports to London.

But which pro sport really has the edge when it comes to putting on a show on British soil? ESPN breaks down the key factors to consider before splashing out on your next great American fan experience.

By planting its seeds in the UK back in the 1980s, the NFL established a sense of tradition that will be difficult to upstage.

Back then, the league rolled out summer exhibition games at the original Wembley Stadium featuring the Dallas Cowboys, Chicago Bears, Denver Broncos and San Francisco 49ers.

American football got so popular in Europe that the NFL set up an entire league on the continent. Though NFL Europe folded in 2007, the timing coincided with the inauguration of the NFL International Series -- an ambitious plan to set meaningful regular-season games in London annually.

In the past decade the NFL has staged 21 International Series games in London, including four last season. Jacksonville, the de facto "London team" currently in the second round of the NFL playoffs, has committed to a long-term plan to host a game a year in London. The team is owned by Shahid Khan, who is also the chairman of Fulham Football Club on the banks of the River Thames.

The NBA, meanwhile, has quietly been making its mark in the UK since 2011, when it launched regular-season contests at London's O2 Arena. Although they don't match the scale of the NFL's Wembley turnouts, the NBA London games sell out in a matter of hours.

Prices to attend Thursday's game have shot up to hundreds of pounds on third-party sites such as StubHub, with the Boston Celtics and Philadelphia 76ers promising the most interesting game yet to be staged in London.

Once William "The Refrigerator" Perry of the Chicago Bears arrived in London for a game against the Dallas Cowboys in 1986, everything changed for the NFL in Europe. Perry's outsized frame and personality became infectious, and paved the way for a love affair that carried on with legendary visitors Joe Montana, Jerry Rice, John Elway, Dan Marino and Marcus Allen. The Fridge even rekindled that love affair with a short stint with the London Monarchs in NFL Europe (then named the World League) in 1995.

NFL superstars who have visited London over the past few years include Tom Brady, Odell Beckham Jr., Ben Roethlisberger, Todd Gurley and Andrew Luck. It completed the circle for Luck, whose father Oliver was president of the World League from 1996 to 2000.

Recent NBA hotshots to visit London have included Giannis Antetokounmpo (in his second season), Paul George, Victor Oladipo and Demar DeRozan. None of them, however, made as big a splash as Kyrie Irving, Ben Simmons and Joel Embiid have been making in London this week.

Case in point: When asked about playing the Celtics this week, Cameroonian-born Embiid - already a major trash-talker -- wasted no time with his answer. "I can't wait to play them in London," he said. "I can't wait to kick their ass."

An NFL game in London "is seen as a destination event" for all Europeans, said Mark Woods, a UK-based sports reporter who once worked in public relations for the Scottish Claymores NFL Europe team.

He points to the NFL street parties that take over London landmarks such as Trafalgar Square and Regent Street, along with giant pregame tailgate parties.

Moreover, Wembley Stadium, where the NFL has hosted most of its London games, is equipped with a giant VIP concourse designed for the type of expensive game-day packages that feature three-course meals and dance floors that come alive to cover bands in silly costumes.

It's the type of experience worth flying in for, and surely set to continue once Tottenham Hotspur's new stadium -- a future NFL hosting site -- is complete.

What has become a fun tradition in London is local NFL fans donning the jerseys of their favorite players -- regardless of the teams suiting up on the field -- and mixing with revelers who have flown in from places like Detroit, Dallas and New Orleans to cheer on their squads.

In contrast, "The NBA is like a concert; it's like a one-off event," Woods said. "It might not be on the same scale, but I'm not sure that it's any less effective for that."

Indeed, the NBA keeps fan events around town somewhat low-key, and there is really no equivalent of the pregame and postgame parties thrown by the NFL.

Instead, the NBA holds its edge in ...

For some NBA fans, celebrity spotting is almost as exciting as watching the game itself.

While London doesn't offer the same glitz as New York, Los Angeles and Miami -- where the likes of David Beckham, Lil Wayne, Drake and Kim Kardashian often sit courtside -- it does have its own star power.

But giving away freebies to local football clubs as a way of adding publicity to the games is not required, Woods said. "You don't necessarily need an association with Arsenal or Chelsea to say that the Celtics and the 76ers are great teams to come and watch," he says. "Sometimes the NBA undervalues the popularity of that."

Though plenty of celebs show up for NFL games, they are nearly impossible to spot at stadiums with capacities hovering around 80,000.

What sometimes gets lost in all the hoopla of attending American sporting events in London is the product on the field.

With the NBA shuffling in and out of town as part of an 82-game regular season, there is simply more of a chance that one team will be less prepared than the other.

Indeed, out of the seven regular-season games staged by the NBA in London, only two remained competitive until the end. But the overtime thriller between Orlando Magic and Toronto Raptors in 2016 was countered by Denver Nuggets destroying Indiana Pacers 140-112 last year.

The NFL, on the other hand, has shown more balance in its competition. As part of a short 16-game season, there is more at stake in London for each team. Although all four NFL games in 2017 were blowouts, its 2016 London schedule featured a 27-27 overtime draw between Washington and Cincinnati and a 30-27 Jacksonville win over Indianapolis.

And who can forget that 2008 shootout between quarterback Drew Brees of New Orleans Saints and Philip Rivers, Brees' replacement with the San Diego Chargers? The Saints won 37-32, while colorful Mardi Gras beads brought over by the New Orleans faithful were flung across the stands in celebration.