NBA: Wizards' Sidney Lowe should have been assessed technical 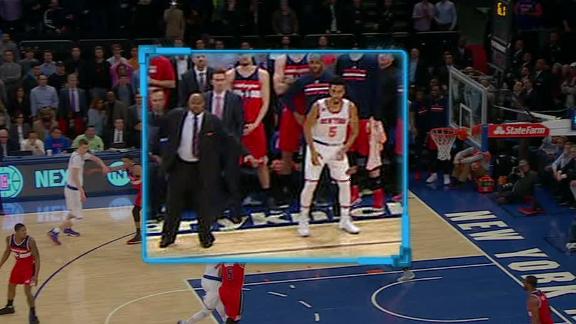 The NBA said on Friday that Washington Wizards assistant coach Sidney Lowe should have been assessed a technical foul for standing on the court in the final seconds of Thursday night's win over the New York Knicks, and the league fined both Lowe and the team.

Lowe was fined $5,000 for "standing on the playing court and potentially impacting game action," and the Wizards were fined $15,000.

Knicks guard Courtney Lee said after the loss that Lowe's presence and shouting as if he were a defender influenced his decision to not shoot a potential game-tying 3-pointer in the frantic final seconds of the game, which the Wizards won 113-110.

The NBA, in its Last Two Minute Report, said Lowe was "standing on the floor close to Lee for several seconds and should have been assessed a technical foul."

"I thought it was one of their players because I was getting ready to shoot and in my peripheral you see a body right there and he is saying, 'I am right here! I am right here! I got your stunt!'" Lee said. "Usually in basketball terminology, that is a switch or I am going to jump out, so I shot-faked and drove. I still should have shot the shot."

Replays showed Lowe temporarily standing on the court between an official and Lee near the 3-point line. Lowe then drifted back behind the sideline as Lee received the ball.

"I've never seen that before, especially not in a situation like that," Anthony said. "Close game, half-court offense, we're trying to make something happen. I've never seen anything like that."