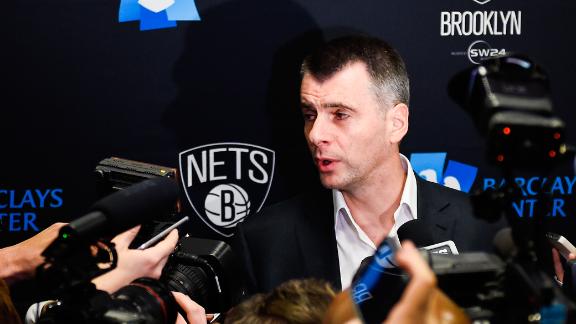 "I think there is a nice proverb in English: Don't let the door hit you where the good Lord has split you," Prokhorov said before the Nets' home opener against Oklahoma City at Barclays Center on Monday, a 116-85 win. "So I think that each side, we did what we thought was the best and I like what we have now.

When Prokhorov was later asked if he is disappointed in how things ended with Kidd after hiring him with no previous coaching experience, the Russian owner said, "I think we shouldn't get mad. I think we should get even. And we will see it on the court."

Kidd took the high road, telling the Milwaukee Journal Sentinel he preferred not to get involved in a war of words.

"I'm no longer in Brooklyn," Kidd said. "Unfortunately they keep talking about it. I don't. I'll let them keep talking.

"Now if it was me and him playing one-on-one on the court, that would be fine."

Kidd also told the Journal Sentinel he isn't looking forward to the Bucks' game against the Nets on Nov. 19

"It's one of 82," Kidd said. "I'm only worried about (Tuesday against Indiana). I've been in hostile environments as a player, as a coach.

"I think it's a part of the game. I think the one thing we can all learn from this is class."

Veteran NBA coach Lionel Hollins was hired to replace Kidd, who sources said sought say over personnel decisions and was rebuffed by Prokhorov. Kidd denied asking for more power in addition to his coaching responsibilities.

Prokhorov spoke for the first time since Kidd was given permission to talk to Milwaukee and ultimately traded to theBucksfor two second-round picks this past summer.

Kidd's departure started a change of direction of sorts for the Nets. After making it clear the team was going after a championship with the hiring of Kidd and a blockbuster trade of three first-round picks for Paul Pierce and Kevin Garnett last summer, the Nets opted not to re-sign Pierce in free agency in July.

Management felt that the Nets were better off not spending money (and the additional $20 million in luxury tax it potentially would cost) to re-sign Pierce, citing that they were no closer to winning a title with Pierce. The team added some younger pieces like Bojan Bogdanovic to a veteran core instead. Pierce, who signed a two-year deal with the Wizards for $11 million, said Kidd's exit was "kind of like a domino from there."

Prokhorov, who spent a record $90.57 million in luxury taxes alone for a roster that cost more than $197 million in salaries and luxury taxes in 2013-14, said his team needs to be "reasonable" and have a "balance" of veteran players and younger talent to develop. He stressed that he will not hesitate to spend if a move that makes the Nets significantly better presents itself.

"It's not a big deal," Prokhorov said when asked about the $144 million figure. "Because I personally compensate this money from my pocket."

Prokhorov says he also will listen to offers for his team but that he wants to maintain majority control of the Nets.

"My position is that I will not give up control of the team," Prokhorov said. "But you know, I am quite happy when somebody sends me a nice offer without taking my controlling interest. I think for the time being nothing is imminent. But still I think it is not bad just to listen."

Prokhorov had been gauging interest among investors for months and sources told ESPN.com before the season started that Prokhorov expressed to at least one interested party that he is willing to give up majority control for the right price.

A source with knowledge of the financial situation said the asking price values the Nets franchise at $1.2 billion and Barclays Center at $1.1 billion.

NetsDaily.com reported that the team had discussions and met with Guggenheim Partners about a "combination of assets" with Prokhorov retaining control of the Nets and Bruce Ratner maintaining control of Barclays.

Prokhorov said he remains "very committed" to the Nets and to bringing a championship to Brooklyn. The Russian owner said he viewed the trade for Pierce and Garnett and the surrendering of three first-round picks as "a very good deal" even though Pierce was a Net for just one season.

"If you look at the market, I think my investment, minimum five, six times more than I spent," Prokhorov added.

Prokhorov acquired majority ownership of the Nets in May 2010 for $223 million with the intent to move the team to Brooklyn and the $1 billion Barclays Center two years later.

The Russian billionaire declared his intention to win a championship by 2015. This season marks the fifth and final year of Prokhorov's five-year title plan.

Prokhorov had previously joked that he would get married if the Nets don't meet his lofty goal.

"Just between you and me, I haven't sent research for a new wife you know," Prokhorov cracked when asked if the team still has title expectations for this season. "I stay committed to the championship. By the way we have lost George Clooney (who recently got married)."