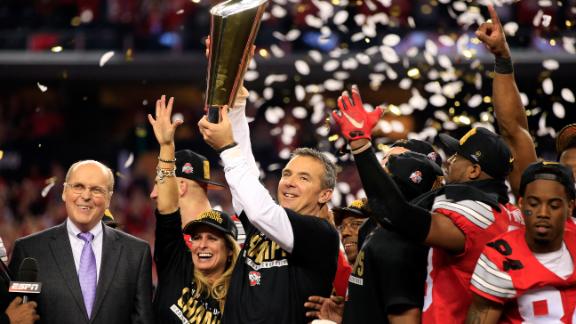 COLUMBUS, Ohio -- Fresh off a national title, Urban Meyer was rewarded with a sizable raise and an extension from Ohio State that will make him the second-highest-paid coach in the country.

The Buckeyes announced Meyer's new contract Monday afternoon, locking him down until 2020 with a salary bump that will earn him an average of $6.5 million over the course of the deal.


"Urban Meyer has done an excellent job strengthening our culture of commitment to academics, career development and winning championships," Ohio State athletic director Gene Smith said in a statement. "Our young men continue to thrive under his leadership, whether on the playing field where they are national champions, through life skills pursuits like Real Life Wednesdays, internships and job fairs, and academically through program-wide efforts to monitor the progress of every student-athlete which has helped the team achieve its highest graduation success rate at 78 percent.


"Additionally, he continues to develop his coaches and attract talented leaders when needed."

There has been no disputing Meyer's impact since he took over in the wake of Jim Tressel's NCAA scandal and a subsequent losing season in 2011 under interim coach Luke Fickell, with the former Florida coach instantly turning around Ohio State with an undefeated season in his first campaign and then winning the national title in the inaugural College Football Playoff in January.


Meyer is 38-3 over three seasons with the Buckeyes, and he has yet to lose a regular-season game in Big Ten play. His original contract with Ohio State was set to run through 2017 and would have paid him $4.9 million this season, a number that will instead jump to $5.8 million before annual raises push it to an average of $6.5 million.


Alabama's Nick Saban was the highest-paid coach in college football in 2014 with a total compensation package that was worth just more than $7 million, according to the USA Today database.


"I am honored to serve as football coach at The Ohio State University and to represent this great university," Meyer said in a statement. "It is a privilege to coach and mentor the young men in this program, and I want to thank President [Michael] Drake and Mr. Smith for their support and their trust in me."