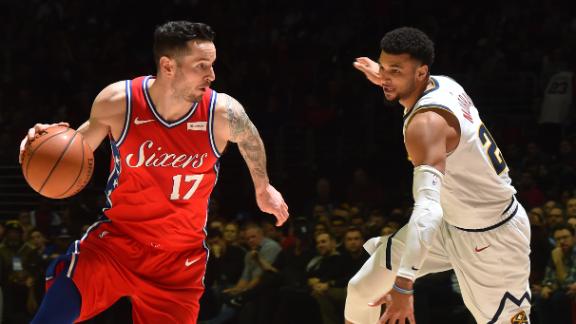 ESPN
The new-look Philadelphia 76ers will host the Denver Nuggets in the first game on Friday since a blockbuster trade was completed.

The key component to this trade is clearly Harris, who is averaging a career-high in points (20.9) along with 7.9 rebounds and 2.7 assists in 55 games this season.

The Sixers looked flat for much of the 12-point loss to the Raptors, prompting general manager Elton Brand to pull off a huge deal.

Playing without guard JJ Redick, who was ill, Joel Embiid led the way with 37 points and 13 rebounds. But the Sixers were lacking energy down the stretch with a thin bench.

"We competed, we were more physical than we were in the first half," Embiid said. "And we made plays offensively but it wasn't enough."

The Sixers suffered just their sixth home loss of the season after scuffling on defense virtually the entire game.

"It's not who we are, it's not how we play defense, it's not anything that we're about," Sixers head coach Brett Brown said. "I give Toronto credit. They drove it down our throats. We didn't respond. Individually, I thought we were poor, just guarding our own man."

Meanwhile, Philadelphia made headlines with another big trade shortly before Thursday's deadline, this time shipping off a big name: 2017 No. 1 overall pick Markelle Fultz.

Fultz, 20, was dealt to the Orlando Magic for guard Jonathon Simmons and first- and second-round picks, ending his time in Philadelphia after just 34 games over a season and a half.

Fultz hasn't played since November while undergoing therapy for thoracic outlet syndrome (TOS), which causes compression or irritation of the nerves or blood vessels in the area between the lower neck and upper chest. Wrist and shoulder issues derailed Fultz's tenure nearly from the start, keeping him off the court and breaking his shooting stroke.

Now that era is officially over, as Philadelphia received a top-20 protected pick in return.

The Sixers will look to win consecutive home games against the Nuggets for the first time since they captured three straight from Feb. 5, 2001-Dec. 16, 2002.

The Nuggets fell 135-130 on the road to the Brooklyn Nets on Wednesday.

Once again, Nikola Jokic turned in a huge performance with his 10th triple-double of the season -- 25 points, 14 rebounds and 10 assists. Mason Plumlee scored a season-best 24 points, while Jamal Murray returned from a six-game absence to post 19 points and 11 assists.

The Nuggets have now dropped two in a row after opening the four-game road trip with a one-point win in Minnesota.

Gary Harris missed his fourth straight game with a groin injury, while Paul Millsap sat out for a second consecutive game with a sore ankle. Still, the Nuggets had plenty of opportunities to pull off another road win.

"He was everywhere," Malone told reporters of Plumlee. "The guy was blocking shots on defense, running the floor and finishing around the basket. He was screening, rolling. What didn't Mason Plumlee do to start the game? Literally Mason was everywhere. Mason played hard. Mason cared. Mason left everything he had on the floor until he fouled out."

Malone was visibly upset in the third quarter when he pulled his starters, as Brooklyn outscored the Nuggets 78-52 in the second and third quarters.

The Nuggets will look to get back on track with a tough road test in Philadelphia, then return home for two games before the All-Star break.