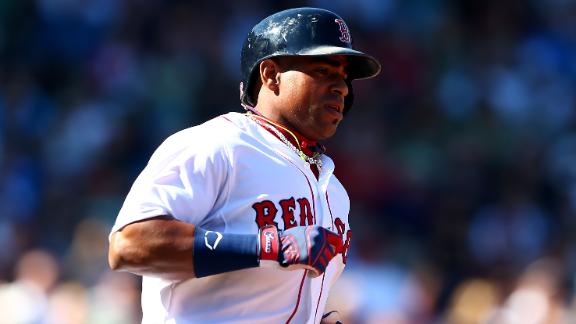 SAN DIEGO -- The Boston Red Sox delivered on their pledge to revamp their starting rotation in the closing hours of the winter meetings here, adding three durable pitchers and suggesting that they are still engaged in adding a No. 1 starter to replaceJon Lester.

The Red Sox acquired lefty Wade Miley from Arizona and right-hander Rick Porcello from Arizona in trades and signed free-agent right-hander Justin Masterson to a one-year deal worth a reported $9.5 million with $2.5M in total possible incentives based on innings pitched.

In a meeting with reporters Thursday morning before flying back to Boston, Red Sox general manager Ben Cherington confirmed the Porcello deal, in which the Sox sent outfielder Yoenis Cespedes, reliever Alex Wilson and 19-year-old right-hander Gabe Speier to the Tigers. The team made the Masterson deal official Thursday night.

The Sox also have a deal in place to acquire Miley from the Diamondbacks for pitchers Rubby De La Rosa and Allen Webster. Arizona GM Dave Stewart, who on Wednesday denied even discussing such a deal, told the Arizona Republic on Thursday that the clubs were still haggling over a minor leaguer who also will go to Arizona as part of the deal.

The Sox acquired Cespedes from Oakland at the July trading deadline for Lester. By flipping the outfielder to Detroit, the net gain from trading Lester was Porcello, a former 2007 No.1 draft pick who turns 26 on Dec. 27 and pitched more than 200 innings for the first time in his career last season, going 15-13 with a 3.43 ERA.

"If we had known in July we weren't going to sign Jon Lester, I think we would have been happy to trade for Rick Porcello,'' Cherington said. "We're excited to have Rick on board.''

Porcello, who averaged just 1.8 walks per nine innings last season, is the only big leaguer with a walk-per-nine rate under 3 and a ground-ball rate of at least 50 percent in the past six seasons. His fielding independent percentage in 2014 was 3.67, and he had an ERA-plus of 116.

"Starting with what he has been the last couple of years, we feel he's been one of the better starting pitchers in baseball,'' Cherington said. "He's been on a staff with a lot of big-name pitchers, really good pitchers, and sort of gets buried in Detroit because they had such a good rotation. But he's been really good in his own right. Given his age, there may be [even] more upside, but what he is right now is really going to help us.''

Cherington indicated the Sox are not done in their search for more starting pitching. The Sox met here this week with Page Odle, the agent for free-agent pitcher James Shields, and are waiting to see how the market develops for free-agent pitcher Max Scherzer. In addition, there are potential trade scenarios involving Phillies left-hander Cole Hamels and Nationals right-handers Jordan Zimmermann and Doug Fister.

"We feel that the winter meetings, we're still early in the offseason,'' Cherington said. "There's a long way to go. We'll see what comes to us.''

On Wednesday, Red Sox manager John Farrell said the team was placing a premium on acquiring durable starters capable of throwing 200 innings per season. Between them, Porcello, Miley and Masterson have thrown 200 innings in a season five times.

Miley is not a hard thrower -- his fastball sits at 91 mph -- and threw his slider last season much more (25.8 percent) than he did in his first two seasons in the rotation. His effectiveness is a product of his control -- although his numbers have risen from 1.71 walks per nine innings in 2012 to 3.35 walks last season -- and an ability to induce ground balls (1.81 ground-ball to fly-ball ratio).

His ERA also has climbed in each of his first three seasons, to 4.34 last season, when he went 8-12, although his fielding independent percentage remained the same (3.98) in each of the past two seasons. His strikeout rate also climbed to a career-best 8.2 strikeouts per nine innings.

Masterson had a difficult 2014 campaign, struggling with a knee injury that landed him on the disabled list with the Cleveland Indians. Later in the season, he was relegated to the bullpen by the St. Louis Cardinals, who acquired him in a trade-deadline move.

Cespedes, who was traded from the Oakland Athletics to Boston at the deadline last season, will add some punch to a Tigers lineup that is anchored by two-time AL MVP Miguel Cabrera. The 29-year-old Cespedes, an AL All-Star selection last season, hit a combined 22 homers and drove in 100 runs. Cespedes has a .263 career batting average with 71 homers and 262 RBIs in his three major league seasons.

"He's a threat and he's a force," Tigers president Dave Dombrowski told reporters in San Diego. "He's someone you always fear at the plate."

Both Cespedes and Porcello are eligible to become free agents after the 2015 season. Miley is in his first season of arbitration eligibility. Porcello is projected to receive $12.2 million in salary arbitration, according to MLBtraderumors.com. Miley is projected to receive $4.3 million. Add Masterson's reported salary ($9.5 million), and the three pitchers will cost around $26 million in 2015, which is just below the average annual value of Lester's six-year, $155 million deal with the Cubs.

The Red Sox were dealing from a position of strength in trading Cespedes, whom they acquired for Lester this past July. The Sox have a glut of outfielders, especially after signing Hanley Ramirez to be their left fielder earlier in the offseason.

The Tigers had added former New York Yankees pitcher Shane Greene to their rotation this offseason in a three-way trade with New York and the Diamondbacks.