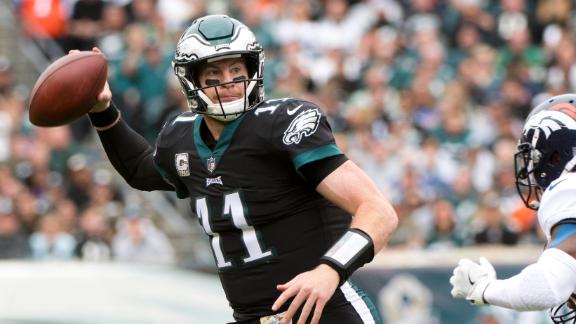 As the NFL season's finish line comes into view, a slew of African players continued their excellent play in week nine, and the J-Train truly arrived at its new station.

This week's NFL Africa Zone brings a return of offensive linemen to the fore (along with the running backs), while defensive backs failed to make the grade.

Player of the week

A week ago, Ajayi was preparing to play for the Miami Dolphins' in their Sunday night game. By Wednesday, the London-born Nigerian was getting acquainted with new teammates in Philadelphia after being traded by the Dolphins. The trade has already begun paying dividends.

The bruising running back, playing behind a legitimately competent offensive line on Sunday, received only eight carries but did maximum damage with those eight carries in the Eagles' 51-23 win over the Denver Broncos. Ajayi ran for 77 yards and broke through with a 46-yard run en route to his first rushing touchdown of the season.

Ajayi is known for punishing opposing defenders whenever he gets the rock, and in bringing his running style over from the AFC, Ajayi, on his other seven runs, had 3.4 yards after initial contact. With a backfield in Philadelphia just as crowded as the one he played on in Miami, maximizing each rushing opportunity will be of utmost importance for Ajayi.

The Saints' defensive duo have made their mark on the defensive line this season and Sunday was merely a continuation of the brilliant play by both. Okafor is fast becoming one of the best signings of the off-season as he and fellow defensive end Cameron Jordan are wrecking opposing quarterbacks while setting the edge as they deal with running backs.

Onyemata shows his development each weekend as he proves a handful for centers lined up against him. In the Saints' win over Tampa Bay, Okafor tallied six tackles, one tackle for a loss, two quarterback hits, and got half a sack in the game. Add in several plays in which Okafor busted Buccaneers running plays and it's no wonder why the Nigerian-American from Austin, Texas is one of the best defensive ends at playing the run this season.

Onyemata picked up four tackles, one quarterback hit, half a sack, and a tackle for a loss in the game. The combination of the Saints defensive ends, as well as Onyemata (and fellow defensive tackle Sheldon Rankins), kept Tampa Bay under 100 yards rushing and refused to allow any Bucs rusher to get up to 40 yards on the ground.

In the primetime Sunday night game, the Raiders offensive line went to battle against the Miami Dolphins' defensive line and came out victorious. Raiders left guard Kelechi Osemele played a big part in keeping quarterback Derek Carr upright, as well as opening lanes for running back Marshawn Lynch to run through.

Lined up against Cameroonian-American defensive tackle Ndamukong Suh for several snaps, and fast-developing rookie Davon Godchaux on other snaps, Osemele was on the field for 31 pass block snaps and only allowed one quarterback pressure. Osemele helped keep a clean pocket for Carr to attempt 30 passes for which he was able to get 21 completions for 300 yards.

On Lynch's return from suspension, Osemele and his colleagues on the offensive line opened up enough holes for Lynch to run for two touchdowns in the 27-24 win over the Dolphins. The Raiders need to get similar production from Osemele and the offensive line in order to latch onto a wildcard spot for the playoffs.

The Saints rookie running back continues to impress each week and undoubtedly is in the conversation for offensive rookie of the year (and was very narrowly beat to our Player of the Week, which is obviously the more important accolade). In the Saints' 30-10 win over their divisional rivals, Kamara got 10 carries from the backfield and ran for 68 yards. In those 68 yards, the Sierra-Leonean American from Norcross, Georgia broke off a run of 17 yards for his only rushing touchdown of the day.

Kamara wasn't finished though, as he was targeted by Saints quarterback Drew Brees seven times, in which Kamara caught six of the passes for 84 yards and one receiving touchdown. Kamara's impact on the Saints' offense is impressive and his ability to create magic when running from the backfield or as a receiving outlet for Brees provides the Saints with a dimension that will be tough to stop as they march towards a division title.

On bouncing back after an early fumble:

"It stinks about the fumble, but it happened last week with Mark (Ingram). We are human. I just had to shake it off . Everybody was supportive. I just had to move on to the next play."

On getting in a groove with the offense:

"Drew (Brees), Mark and the offensive line are making it real easy for me. They are doing a great job. It's making me comfortable to go out there and make the plays that I am supposed to make."

On the first touchdown scoring drive of the game:

"It was huge. We got a lot of momentum coming off that drive. We had a lot of energy. The sideline was hyped. The defense played great and got us the ball back. It's great to play complementary football."

Players to watch in Week 10

Coming off a bye week, the Bears play the Aaron Rodgers-less Green Bay Packers at Soldier Field. Packers quarterback Brett Hundley hasn't done much to show he can lead the Packers to a victory in Rodgers' absence, and the Bears secondary will aim to disrupt the third-year quarterback.

Amukamara doesn't have an interception or fumble recovery on the season but the Nigerian-American cornerback has played brilliantly and is due to get an interception against the Packers. The Packers still have excellent wide receivers in Jordy Nelson, Davante Adams, and Randall Cobb. Amukamara and his teammates will need to take away Hundley's options whilst keeping him in the pocket long enough for the Bears defensive line to get to the youngster.

The hapless Browns also return from a bye week to play the Detroit Lions on Sunday in the Motor City. Still seeking their first win, the Browns will need to get production from all three phases of the games (offense, defense and special teams) as well as the benefit of the doubt from the refs on close calls. Ogbah has gone without a sack in his last four games and has not brought down an opposing quarterback since the Browns game against Cincinnati in week four (his best game of the season).

Sitting at two sacks and two forced fumbles, Ogbah will find the return of rookie defensive end Myles Garrett on the opposite end of the line to be the tonic to free him up as he goes one-on-one against the Lions right tackle. If Ogbah and Garrett can get to QB Matthew Stafford regularly, the Browns defense will be able to give the offense and, rookie tight end David Njoku, a chance to get that first victory of the season.

Eagles stomp on Denver
Carson Wentz throws for 199 yards and ties his career high with four touchdown passes to lead the Eagles to a 51-23 win over the Broncos.