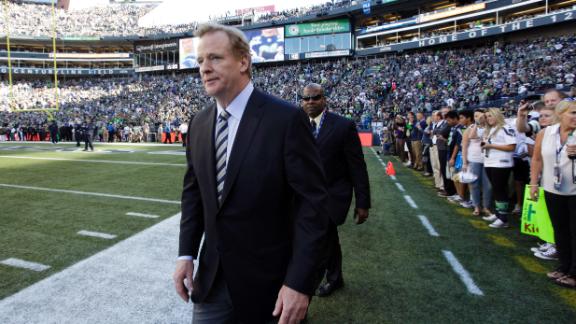 NFL spokesman Greg Aiello said in a statement Wednesday that the investigation will be overseen by NFL owners John Mara of the New York Giants and Art Rooney II of the Pittsburgh Steelers.

Commissioner Roger Goodell said Mueller, who was the director of the FBI for 12 years, will have access to all NFL records.

Mueller, based in Washington, D.C., is a partner in the law firm of WilmerHale, which helped negotiate the NFL's Sunday Ticket package with DirecTV. The firm also has represented Washington Redskins owner Dan Snyder, and several former members of the firm have taken positions with NFL teams.

Mara and Rooney are members of key NFL committees and have closely advised Goodell throughout his tenure.

"The NFL does not just have a Ray Rice problem, they have a violence against women problem," the statement read. "NOW continues to ask for Roger Goodell to resign, and for his successor to appoint an independent investigator with full authority to gather factual data about domestic violence, dating violence, sexual assault and stalking within the entire NFL community -- not just regarding the Ray Rice incident -- and to recommend real and lasting reforms."

The NFL's announcement came after a law enforcement official told The Associated Press on condition of anonymity that he sent a tape of Rice striking his then-fiance at an Atlantic City casino to an NFL executive in April. Goodell has maintained that no one at the league office had seen the tape prior to Monday, when it went viral online.

A league executive, speaking early Wednesday before the AP report was released, didn't believe the Rice controversy would cost Goodell his job -- unless the video was viewed before Monday.

"No," the executive told ESPN.com, "but if Goodell and the league saw the video beforehand, he is not commissioner in March for the league meetings."

ESPN.com's Mike Sando and The Associated Press contributed to this report.

McManus On NFL Investigation
Jane McManus of espnW discusses what the NFL's investigation of the Ray Rice situation will look to accomplish.

Will Owners Stand By Roger Goodell?
Adam Schefter reacts to a statement made by an anonymous NFL team owner that said if the AP story is true, no owner will support commissioner Roger Goodell.

Level Of Confidence In Roger Goodell
Bill Polian discusses his level of confidence in commissioner Roger Goodell and talks about the investigation former FBI director Robert Mueller will conduct.

How NFL Investigation Will Take Place
ESPN business analyst Andrew Brandt breaks down how the NFL's independent investigation into the handling of the Ray Rice investigation will take place.