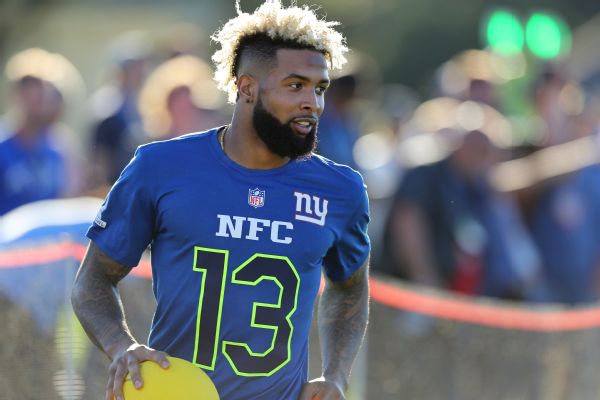 Beckham was a fan favorite in Orlando, signing countless autographs and engaging daily with young fans. He embraced the role and was among the most popular and entertaining players throughout the week.

"I would be remiss not to acknowledge how engaging and professional Odell Beckham Jr. was during the entire week of the Pro Bowl," Vincent wrote in the letter obtained by ESPN. "By far and away, he represented the New York Football Giants and the NFL with great poise, congeniality, and professionalism."

Beckham, 24, has been both a thrilling and controversial figure since he was chosen in the first round of the 2014 NFL draft. He's extremely popular in the Giants locker room and has close friends around the league, including Pro Bowlers Jarvis Landry, Von Miller, Patrick Peterson and Dez Bryant. Those who know him well insist he's a passionate and good-hearted person.

However, Beckham has his detractors, especially among opposing cornerbacks. There was his on-field scuffle with Josh Norman in 2015, which earned Beckham a one-game suspension. And Buffalo's Stephon Gilmore and former Washington cornerback Chris Culliver have publicly ripped the enigmatic wide receiver for his complaining on the field.

Beckham was also among the league leaders in fines this season. There were at least six incidents where he was docked by the league. He had his share of controversy with complaints about officials and poor sideline behavior, and he allegedly punched a hole in the wall at Lambeau Field after a playoff loss.

These are the two sides of the often misunderstood star.

"He's a talent that a lot of people wouldn't be able to understand," Bryant told ESPN during Pro Bowl week. "You want to criticize him. You want to talk about him because you just don't understand him -- his whole mindset, the way he goes about his game. He's a hell of a football player. He's a great football player."

Beckham has also proven to be a hit with young fans. He's constantly getting them involved, whether it's before games or when holding a camp during the summer.

It was evident again last week at the Pro Bowl, when he willingly embraced the role as an ambassador of the game. It didn't go unnoticed.

"Odell single-handedly took our engagement to a higher level," Vincent wrote to the Giants. "You should be proud to have him representing your club and your city at the Pro Bowl and I didn't want to go another day without writing to acknowledge his extraordinary efforts."