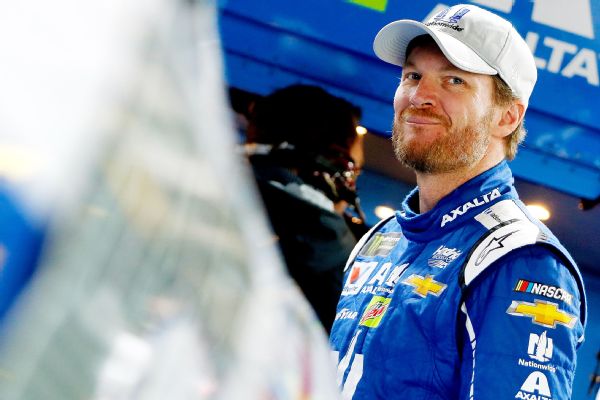 Earnhardt sponsor Axalta had planned for him to drive a car with the Eagles logo in the NASCAR Cup race June 11 at Pocono Raceway to promote the Axalta All-Pro Teachers program.

An Eagles spokesman tweeted at the time of the announcement in April an image of what the car would have looked like.

Earnhardt was not thrilled with the idea at the time, even calling team owner Rick Hendrick, who told him he had to do it.

"I'm really sad about that. Being a Redskins fan, it was very hard to wrap my brain around it," Earnhardt said on Periscope when the paint scheme was announced while admitting there was a "pretty cool angle" to the program.

But Earnhardt is off the hook. The Eagles and Axalta released a statement Friday stating that the paint scheme violated an NFL rule that club marks cannot be used in connection with the promotion or presentation of another sport.

"Having been reminded of the NFL's policy, we understand and respect their point of view," the Eagles said in a statement. "While we are disappointed that we will not have the opportunity to increase the visibility of the Axalta All-Pro Teachers program through the Pocono 400 this year, we remain committed to supporting STEM curriculum and the educators who inspire our youth through our relationship with Axalta."

The sponsor also expressed its disappointment.

"Without doubt, we are deeply disappointed that the Axalta All-Pro Teachers car will not run," the company said in a statement.

Earnhardt, who has the biggest brand of any driver in NASCAR and is well aware of the importance of policies for logos, said he understood the reasoning.

"I have no issue," he said after qualifying Friday at Dover International Speedway.

He said he had looked forward to honoring the high school teachers that are part of the program. Some teachers and members of the Eagles will attend the race next week.

"It's really just unfortunate for Axalta and a good crossover promotion," Earnhardt said. "That would be pretty cool, even though, obviously, we joked around being a Redskins fan and all that.

"But it was going to be a pretty fun promotion, and we are still going to try to maximize what opportunity we can with it."

At least Earnhardt wasn't put in an uncomfortable position. He has often said that a good-looking car helps his attitude when he gets ready to race.

"I hope my Redskins pals, all the fandom that I'm a part of, I hope that you don't disown me -- HTTR," Earnhardt said in April.
Report a correction or typo
Related topics:
sportsespnaxaltawashington redskinsdale earnhardt jrnascarnflphiladelphia eagles
Copyright © 2020 ESPN Internet Ventures. All rights reserved.
More Videos
From CNN Newsource affiliates
TOP STORIES