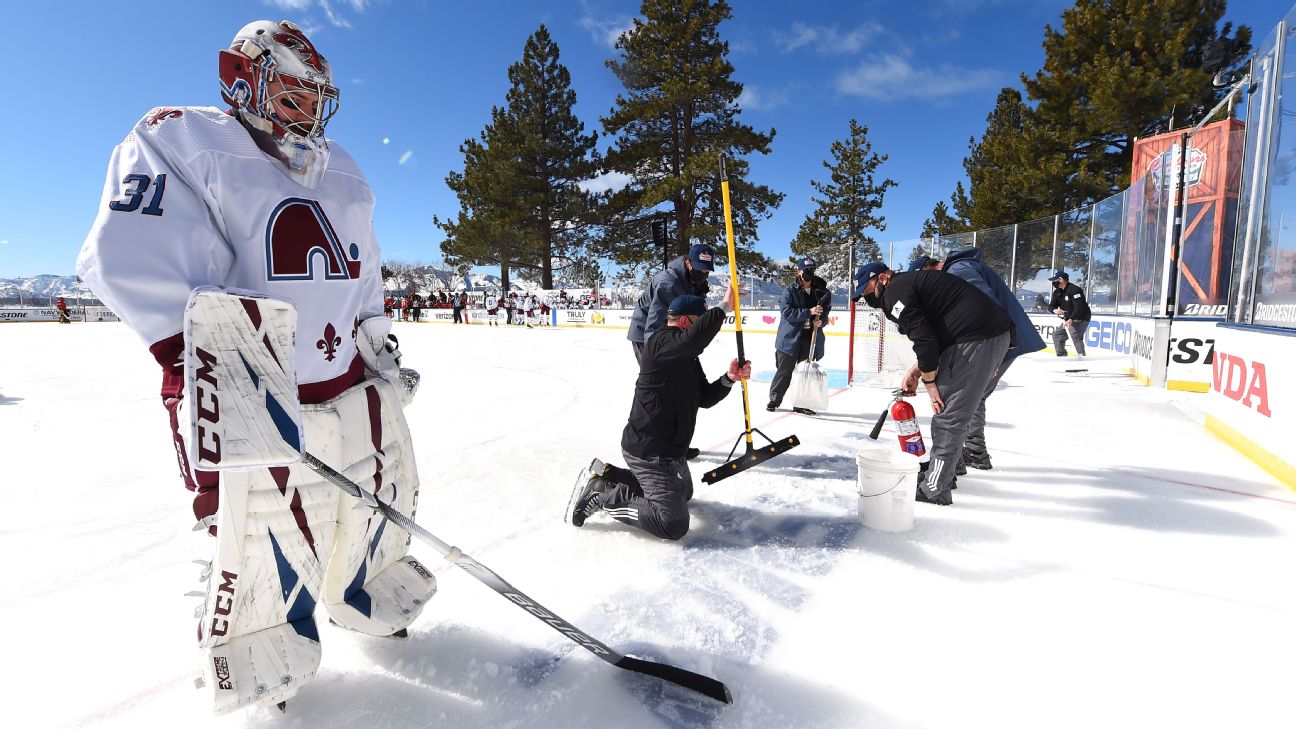 The NHL's Lake Tahoe outdoor game between the Colorado Avalanche and Vegas Golden Knights ended under the lights late Saturday night after it was paused for over eight hours because of deteriorating ice conditions following the first period.

Puck drop was at 12:12 p.m. local time (3:12 p.m. ET) under intense sunshine that was melting snow around the rink and causing problems with the ice. The Avalanche led the Golden Knights 1-0 after the first period on a goal by defenseman Samuel Girard. The teams left for their dressing rooms and remained there until NHL commissioner Gary Bettman announced the game would be completed later Saturday.


"We knew that unabated sunshine was a problem," Bettman said on NBC, which shifted the completion of the game to NBCSN. "After consulting with our icemakers and both teams, we didn't think it was safe or appropriate to continue this game at this time. Some of the players wanted to continue playing. Others were more concerned. I felt the most prudent thing to do was to discontinue the game now."

Colorado captain Gabriel Landeskog said his team was ready to go back out but was pulled back by league officials.

"It starts with our mindset, and we knew that was an advantage that we had. We were ready to play. Whether we were going to keep playing this morning or later tonight," he said.

"It was weird. It feels like a blur, honestly. The ice was bad, but we never even thought of stopping. I didn't think it was a possibility. I thought we were just going to grind it out and muck it up," said Avs star Nathan MacKinnon, who scored after the resumption.

During the delay, the players returned to their hotels to grab lunch and then make an attempt at pregame naps. The Vegas coaching staff treated the first period like it would a previous full game that it breaks down and reviews, and treated the final two periods that night as a separate game.

"There was a reason why we postponed it," Vegas defenseman Alec Martinez said. "They did the best that they could, but the sun was beating down on it a little bit too much. It was melting the ice. There were some big chunks taken out. We obviously don't want anyone getting hurt. If there are big chunks out of the ice, it's going all the way down to the cement, and that's creating a difficult and dangerous playing environment for all of the guys. I think the league did the right thing in postponing it. When we came back, the ice was great."

The rink was constructed next to the shores of Lake Tahoe on the 18th hole of a golf course at Edgewood Tahoe Resort. The NHL had temporary lights on cranes around the rink, and Bettman was confident the league had enough lighting for the nighttime game.


The NHL decided Saturday morning to move Sunday's outdoor game between the Philadelphia Flyers and Boston Bruins from an 11 a.m. PT/2 p.m. ET start time to a 4:30 p.m. PT/7:30 p.m. ET start due to what's expected to be another sunny day.

The NHL originally moved the game one hour earlier because of sun concerns during the week.

This created a scheduling domino effect. The New Jersey Devils vs. Washington Capitals game was moved from 7 p.m. ET to 2 p.m. ET to fill the gap created by the rescheduling of the outdoor game. The Bruins vs. Flyers game was shifted to NBCSN.

"This has been the most difficult weather circumstance we've had -- and it's a beautiful day," Bettman said. "The cloud cover is everywhere but where the sun is."

The first sign of trouble came when the Flyers and Bruins had their outdoor practices on Saturday morning moved indoors at the South Lake Tahoe Ice Arena. According to Flyers coach Alain Vigneault, the practices were relocated to preserve the quality of the outdoor ice, as after two sessions on Friday it was in rough shape.

Later, with the sun beaming on the rink, players and officials appeared to stumble over ruts during the game's first period. The snowfall that covered the golf course near the rink had melted considerably since the morning, when South Lake Tahoe had two to five inches of snowfall overnight.

Some have questioned why the NHL started its game in the middle of the day if sun could have been an issue. NHL deputy commissioner Bill Daly told ESPN on Saturday that the original start times were established a while ago in conjunction with NBC "for the purpose of hitting their available windows and maximizing distribution and impact."

Daly said the league had no hesitation in adjusting those start times "to maximize player safety" and to ensure that the game could be completed.


"The decision to move [Sunday's] game first to 11 a.m., and then to 4:30 p.m., was made based on what we understood the weather forecast was predicting for [Sunday]. [Saturday's] forecast was for it to be partially cloudy through midafternoon, with temperatures in the 30s. At the time we came to the rink, we had every reason to believe we could get the game in," he said.

As for restarting Saturday's game at the late hour, Daly said that was "completely a function of when our ice crew believed" the teams could safely complete the game.

"Given tomorrow's forecast, our only other option was to go very early tomorrow morning -- 7 a.m. local. This was seen as a better alternative to ensure a full day of ice care tomorrow before the 4:30 game," he said.

Daly said the lighting for the nighttime game had been tested and was "more than sufficient and even more coverage and brightness than many of our indoor arenas."

The NHL announced contingency plans before the game if there were "unplayable weather conditions." Among them: That the game would be considered "official" once two periods had been played, and the team leading when play was stopped would be declared the winner.

If the score was tied when play was halted after two periods, each team would be awarded one point in the standings, and the winner would be determined by a shootout. That shootout would take place immediately after play was stopped at the Lake Tahoe rink or, if conditions wouldn't permit that, at Ball Arena in Denver on Monday, before the regularly scheduled game between the Golden Knights and Avalanche. 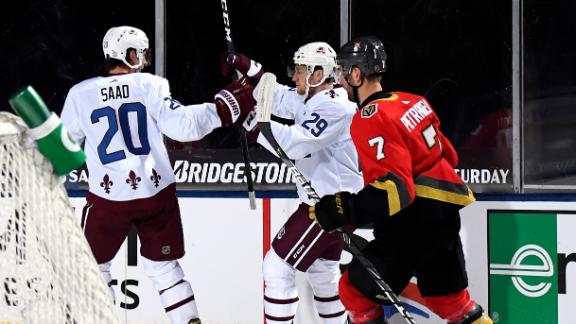 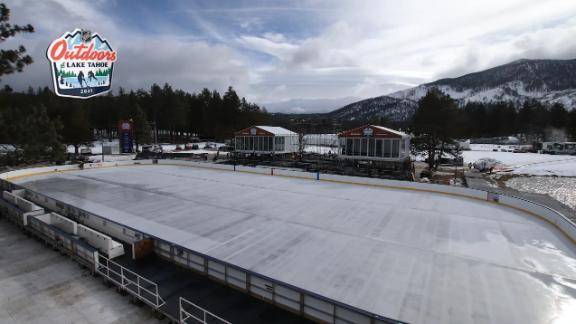