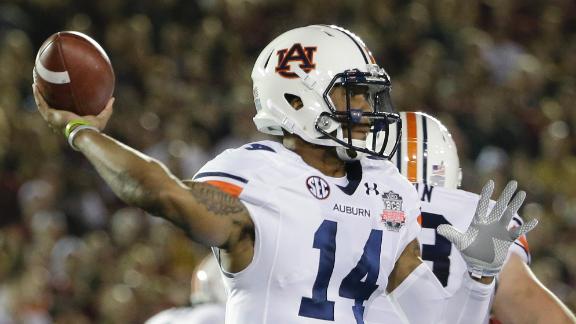 HOOVER, Ala. -- Auburn coach Gus Malzahn said quarterback Nick Marshall lost the right to attend SEC media days after he received a citation for possession of a small amount of marijuana Friday, but as for any further punishment, that's yet to be determined.

"Up until last Friday, Nick has been a model student, a model teammate and a model citizen," Malzahn said Monday at media days. "But he made a mistake, and he's going to have to suffer the consequences for that mistake. I'm not saying what that consequence is right now, but it will be addressed."

As a junior, Marshall threw for 1,976 yards, rushed for 1,068 yards and scored 26 combined touchdowns, leading the Tigers to a berth in the BCS National Championship Game. A year earlier he was throwing touchdowns in junior college after he was dismissed from Georgia for violating team rules.

If Marshall were to miss any time, Malzahn is more than confident in backup quarterback Jeremy Johnson, who started in two games as a freshman and threw six touchdowns.

"The good thing is that we've got Jeremy Johnson who could start for the majority of the teams in college football," Malzahn said. "We'll just see what happens."

Marshall's citation came just weeks after teammate Jonathon Mincy was arrested and charged with marijuana possession. There's been no word on Mincy's punishment, either.

"We had two guys make mistakes," Malzahn said. "We're going to deal with those mistakes. I feel very good about the big picture, where we're at with the program and I know our players and our coaches feel the same way.

"We have a very strong group of seniors that understand the expectations, and both our guys are very remorseful."

One player who likely won't be available for the season opener against Arkansas is sophomore defensive end Carl Lawson. Malzahn confirmed that Lawson injured his knee the last week of spring practice and had ACL surgery in early May.

"We got it fixed," he said. "Carl is working very hard. He's determined to try to make it back toward the end of the year."