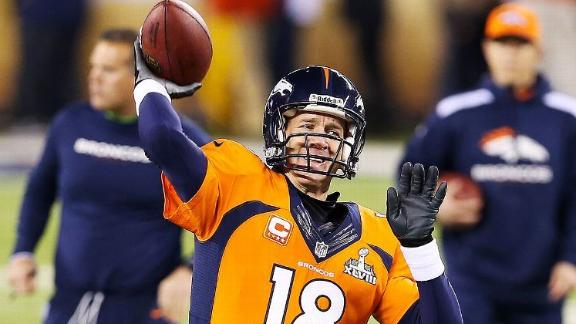 The presence of Manning struck a chord in Saban, who also said the quarterback was a good example of how athletes at all levels should approach their crafts.

The details of how the meeting came about weren't clear, but Saban said Manning and Gase were "making some visits" and wanted to stop by Tuscaloosa.

"A lot of people would say, 'Wow, the guy is one of the best, if not the best, from a career standpoint and about as good as anyone has been in the history of the league,' " Saban said. "After all the experience and knowledge that he has, he's going out to try and seek more knowledge and understudying of the game of football so he can play better."

The benefit, however, wasn't entirely one-sided.

Denver likely runs as efficient a no-huddle offense as any in the NFL. Manning, the orchestrator of the Broncos attack, threw for a league-record 55 touchdowns this past season.

Saban, for his part, has struggled some recently against no-huddle offenses. Alabama gave up a record 628 yards of offense in a 49-42 win over Texas A&M last season, and then lost in the final second to Auburn in a game that featured the Tigers running an uptempo attack that yielded 296 yards and two touchdowns on the ground.

Former coaches Joe Gibbs, Gene Stallings and Sylvester Croom were also a part of the clinic."Peyton Manning has been a friend and very well respected for a long time, ever since I coached in the league," Saban said. "We played them when he was at Indianapolis and I was in Miami. His dad [Archie] has been a really good friend of mine for a long, long, long time."

Saban added that Gase worked for him at Michigan State and LSU.

"To be honest with you," Saban said, "[Manning] was just trying to learn so he could be a better player."