Nike 'working to implement a solution' after string of jersey tears 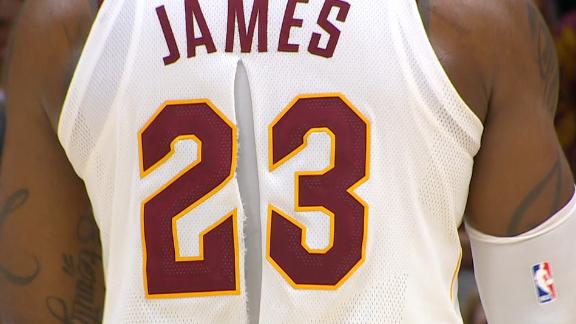 After at least five of Nike's NBA jerseys ripped on players this season, the world's largest shoe and apparel giant has acknowledged it will make substantive changes.

The company, which signed an eight-year, $1 billion deal with the NBA that began this year, said in a statement provided to ESPN on Monday night that the initial product presented to teams needs more reinforcement.

"Nike has always put the athlete at the center of everything we do and we have worked hard to create the most advanced uniforms in the history of the NBA," the company said in the statement. "They are lighter and deliver great mobility and sweat wicking characteristics, and the feedback from players has been overwhelmingly positive. However, during game play we have seen a small number of athletes experience significant jersey tears. We are very concerned to see any game day tear and are working to implement a solution that involves standardizing the embellishment process and enhancing the seam strength of game day jerseys. The quality and performance of our products are of utmost importance and we are working with the NBA and teams to avoid this happening in the future."

Nike did not reveal how many jerseys, if any, will be discarded in the process.

When they ripped, Nike's jerseys didn't just tear, they fell apart on the biggest of stars and in ways that made video of the moments spread quickly on social media.

In the closing minutes of an opening-night game, the jersey ofCavaliersstarLeBron James, Nike's highest-paid current NBA player, ripped down the middle.

Eight days later, Nike president and CEO Mark Parker told CNBC that "we've isolated the issue and we feel like we've got command of the situation and feel good about where we are."

But it didn't end.

WarriorsforwardDraymond Green's jersey ripped in a fight with theWizards'Bradley Beal, and last week76ersrookieBen Simmons' jersey completely tore after being tugged at while he was fighting for a rebound. Cavaliers forwardKevin Love had to go the locker room after his jersey tore when he pulled it over his head.

While the jerseys tore on some of the most high-profile players in the league, Nike has seemingly skirted any criticism from the players; all five -- including theLakers'Tyler Ennis, whose jersey tore in the first preseason game -- are Nike spokesmen.

NBA players have dealt with torn jerseys in the past, but not with this frequency.

The authentic NBA jersey made by Nike promises to dry 15 percent faster than the previous Adidas jersey, and it is partly made out of recycled bottles. A similar version of the jersey was used in the 2016 Olympics with no known issues.

Despite the embarrassment for Nike, there have been no known complaints from consumers about the jerseys they've purchased, which has minimized the business impact of the mistake.