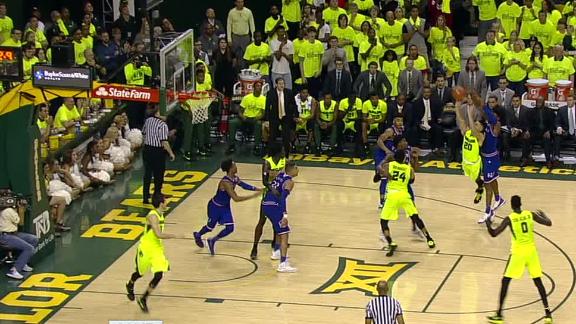 WACO, Texas -- No. 3 Kansas never seems to be too far behind to rally for victories.

After another comeback victory against a fellow top-10 team, the Jayhawks are probably too far ahead in the standings for anyone to keep them from winning their 13th consecutive Big 12 title.

Landen Lucas made two free throws with 11 seconds left, and Kansas didn't allow No. 4 Baylor to get the ball to Johnathan Motley on the final possession, as the Jayhawks grabbed a stranglehold on the Big 12 race with a 67-65 victory Saturday.

"As far as a mental toughness team, I would take this team and go to the house and let it ride however it goes," Kansas coach Bill Self said.

Five days after overcoming a 14-point deficit in the final 2:43 of regulation and then winning in overtime at home against No. 9 West Virginia, the Jayhawks had to come back from six points down in the final 3 minutes this time.

"We were down by more than that last game," said Frank Mason III, who led Kansas with 23 points. "We just showed toughness and leadership as far as the older guys, and I think the younger guys did a great job of following."

The Jayhawks (24-3, 12-2) have a three-game lead in the Big 12 with four games to play. With one more win, Kansas will match the UCLA teams of the 1960s and '70s by winning 13 consecutive conference championships, though Self still isn't ready to talk about that.

"Well, we put ourselves in a great position," Self said. "We're not going to take it for granted. ... Certainly with a different outcome, you're up one [game] with four to play, so I'm really proud of our guys and how hard they compete."

Lucas was fouled after his offensive rebound of Devonte Graham's miss.

Baylor (22-5, 9-5) had one more chance, but after being unable to get the ball inside, Manu Lecomte missed on a last-ditch shot he took surrounded by defenders.

"There was no way we could get it," said Motley, who was surrounded by Landen and Josh Jackson.

Motley had 19 points for Baylor, which has lost four of its last six games. Lecomte had 16 and Jo Lual-Acuil Jr. 11.

The Bears led 65-59 after King McClure made two free throws with 3:34 left. But they didn't score again.

Jackson, who had 16 points, then had a layup and a one-handed windmill slam. Graham's two free throws with 2:16 tied the game and were the last points before Lucas, who had missed his only two attempts earlier in the game, went to the line.

"I actually was very confident. I thought he'd make them. I did," Self said. "I think he was confident too. ... I'm not even sure they were close early, but these were pure and I don't think there was much doubt."

Kansas: Being behind was no problem for the Jayhawks, who for the second time this season have won consecutive games over top-10 teams. With the conference title in reach, the next three games are against teams in the lower half of the Big 12 standings. Kansas has won 10 in a row against Baylor, though the last four were decided by six points or less.

Baylor: Not too long ago, Baylor was considered a potential No. 1 seed for the NCAA tournament. But the Bears now need to focus on getting back on track for March instead of chasing a Big 12 title. "We all want a conference championship, but I think everybody on our team definitely would rather have an NCAA Final Four or championship more," Baylor coach Scott Drew said. "So that's what we've got to gear for and get ready for and look forward to that opportunity."

In a raucous Ferrell Center, with all the Baylor fans wearing neon yellow highlighter-colored T-shirts, Kansas never led until Mason's jumper with 10:56 left made it 49-47. That was part of an 11-0 run before the Jayhawks went nearly 6 minutes without a field goal while Baylor scored nine points in a row.

The Bears led by 12 before Mason and Jackson hit 3s in the final 38 seconds of the first half. "If it's at 12, they have total control and momentum, but we kind of got a little bit of that back with those two plays," Self said.